The Kirby franchise is a little weird. Whenever one comes along, it tends to be cut from the same cloth: a colorful, well-designed platformer with no challenge factor to speak of, often designed to be someone’s first video game. If you cannot beat an average Kirby title (not counting Canvas Curse), you’re either brand new to video games or you have the hand-eye coordination of a coral snake. Granted, getting a 100% score usually takes some coordination and persistence, but you will see the last boss.

Of course, this is about the only negative there is, and even bringing it up makes me feel like history’s greatest monster. Kirby’s one of the most adorable characters in video game history, and even though I could find my way through one of his games backwards and blindfolded, I’d have fun while I did it.

Super Star Ultra is a remake of 1996’s Kirby Super Star on the SNES, one of the better games in the series to date. A lot of the gameplay is exactly the same, but the presentation’s been adjusted, using the dual screens to display maps, movelists, remaining lives, and the other things that, in the original version, were taking up about a fourth of the screen. 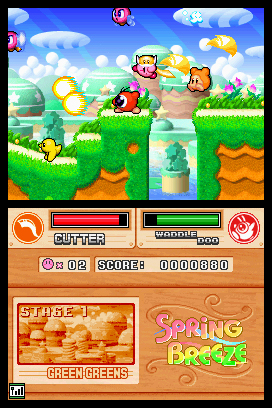 When you fire it up, you’re looking at a variety of games and minigames. By clearing the “episodes” of the main game, such as “Spring Breeze,” you unlock more game types, such as “The Great Cave Offensive” and “The Revenge of Meta-Knight.” Like the original Super Star, Kirby can swallow his enemies to gain new abilities. While thus empowered, you can press X to spawn a new character to help you out, controllable by a second player or the CPU (you can choose which at the start of a new game; the second player can jump in via local wireless). Which character is determined by which power you have, and they have their own lifebar. Their presence can make certain fights utterly trivial (an ally with a projectile can just rush down most of the minibosses, saving you from having to fight them “properly” by inhaling their projectiles), and can also really complicate some parts of the game; they tend to instantly dispatch any enemy they see, which makes life difficult if you need a certain power to get through a section.

The old Ultra mini-games, such as the reflex-tester “Samurai Kirby,” are gone, replaced by more touch-screen-focused games such as a shooting gallery and a sort of Kirby-focused take on Root Beer Tapper, where you must knock bugs and bombs off of a conveyor belt before Kirby accidentally eats them. You can play these games against up to four players via wireless, of course, and if you like arcade-style gaming, you can’t go wrong with them.

The meat of the game is in the more “traditional” modes. The initial available game couldn’t be easier, but it gets more interesting as you go. “The Great Cave Offensive” is as close as you’ll get to a “Metroidvania” Kirby, with Kirby searching for hidden treasures throughout a large underground complex. Some of them are genuinely difficult to find, too, making this game mode the one with the longest playtime. If you resist the urge to find a walkthrough, you could be at this for a while.

That said, I think my favorite mode in the game is “The Revenge of Meta-Knight,” which is kind of like speed Kirby. Each section has an increasingly stringent time limit, forcing you to move as fast as you can. This is as close to true challenge as Kirby gets, and as a result, it’s a lot of fun. 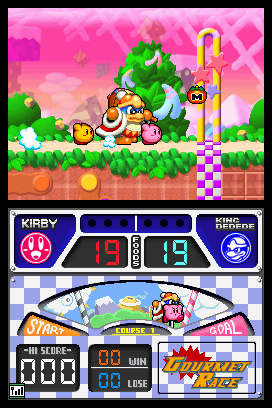 You’ll never regret the time you spend playing Kirby. It’s so charming that you may notice how fast you’re plowing through it, but you’ll enjoy it. The low challenge means the title has a relatively low lifespan, but you can get a solid week or so out of chasing down all the treasures and playing the minigames. I’m not sure it’s quite worth a purchase, but it’s definitely fun.