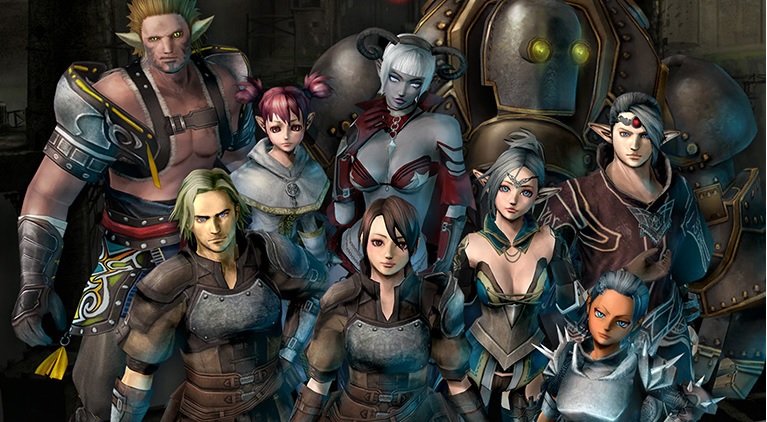 The Valhalla Knights series is like that guy who hangs out at the bar every night and plays darts by himself. As you pass by, you stop and watch him throw a couple rounds because he’s not half bad. After all, his shots hit the board, and he can even call out a couple numbers and hit them with precision. But when it comes down to landing a bullseye at the end of a session, it seems that, no matter how much he practices or excels at various other parts of the game, he just can’t ever seem to seal the deal. Thus, you ultimately leave slightly impressed, but also disappointed in his inability to live up to the standards he himself set. That’s how the latest installment in the Valhalla Knights series can be best explained: a game that comes up just a bit short in the end.

Valhalla Knights 3 tells the tale of a land that’s embroiled in war. After the Beigan Empire’s blitzkrieg assault on its neighboring kingdoms in search of legendary treasure, the remaining unoccupied nations rise up to meet the tyrannical emperor and drive him back from their lands. But as the once vast Beigan Empire begins to wane in power and influence, its ruler seems unaffected by such woes, as it is rumored he cares not for his country, but only for the heirloom said to exist within the confines of the continent that grants a man any wish he desires. Amidst all of the warring and carnage, a hero and his clan members are imprisoned for unknown crimes. This hero just so happens to be the player’s created character. Upon incarceration, we are shown that our fare champion is not a prisoner at all in fact, rather an imperial spy sent to infiltrate the ranks of the prison that is said to sit atop caverns that hold the aforesaid artifact of limitless power.

From the get-go, Valhalla Knights 3 can’t ever decide what kind of story it wants to tell. Sometimes it wishes to be serious — this is seen within minutes of starting up the adventure, as two characters are cut down right before players’ very eyes, and another female combatant is taken and sold off into an extremely particular kind of underground “customer service.” These events, and the many that follow, make the endeavor feel like one that wants to be gritty, dark and on occasion even brooding. But then, there’s the far-too-often comedic sidekick of the group, who tosses out a few too many lame one-liners, and a brothel for players to visit between missions in order to partake in massages and happy-endings. The juxtaposition never quits throughout the game’s rather lengthy tale, constantly pulling the individual in one direction for a while and then in the other for a time. This vacillation, when done effectively, can do wonders for storytelling by lightening the mood when events get a little too intense for comfort. Here, however, it’s utilized in such a way that it’s hard to decide if Valhalla Knights 3 is gritty-fantasy, or medieval-comedy.

This influx story would be forgivable if the game’s cast made up for its polarizing approach. Unfortunately, the personalities here all fall into tropes we’ve seen dozens of times over, making interactions feel trite, or at the very least clichéd and predictable. They lack any kind of substantial depth, making it difficult really care about their development (what little there is). Thankfully, XSEED’s localization is money in the bank, rarely faltering or presenting with glaring issues.

Needless to say, Valhalla Knights 3 won’t be remembered for its plot as its simply uninteresting and falls flat on what are meant to be the big moments. In truth, however, none of the games have ever emphasized story over gameplay. That design philosophy is very much so still intact with this third entry, as its quite clear that the developers wanted this to be an enjoyable game to play, rather than one to watch or read. To that end, the team behind VK3 have brought back fan-favorite elements of the previous titles, and also integrated new mechanics to keep this feeling like a tried-and-true sequel instead of an incremental step forward. Thus, in the area that matters most, Valhalla Knights 3 soars rather high.

For starters, this is an action-RPG and thus controls flawlessly as one. Button-mapping is customizable to a degree, and we never once felt at odds with the control setup. This was a major benefit when considering how hard a game this is. Beginning with the basics, players have the prison that acts as a central hub for collections missions, buying and selling equipment, recruiting characters and of course intermittently visiting the equivalent of a hostess bar. While in town, players can interact with a number of NPCs, and doing so impacts their relationship quality. This is particularly seen with regards to the hostesses, which can essentially be won over or pissed off depending on one’s treatment of them. There are particular benefits of doing this, so making sure to keep decent interactions with the prison-folk is part of the game (literally and figuratively). 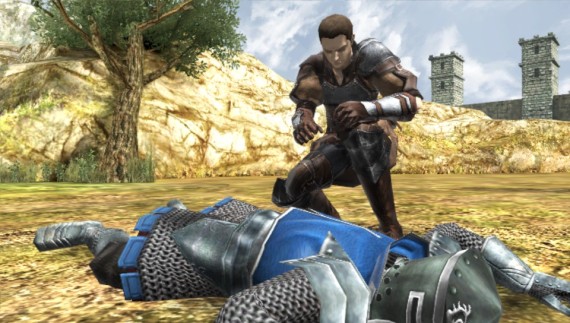 But it’s not just about the town NPCs, it’s about those in the player’s party. For the first time in a VK game, players now go into battle with a party of seven. Yep, seven, not one like in the past. In combat, folks can dish out commands to their comrades via the d-pad while they hack things up themselves. When slashing away at baddies, players are given weak and heavy attacks to chain together for combos. The higher the combo, the more experience netted from an encounter. This encourages stringing together attacks from one foe to the next, giving the battles an even greater sense of speed and purpose. Then there’s the ability to unleash class-specific abilities, in addition to the option to switch to any other party member on-the-fly by the simple press of the select button. There’s more to it than just mashing on attacks, however; there’s the opportunity to block, parry, which leave enemies stunned for a moment, as well as use items and buffs to make opponents easier to wipe out. The combat itself ultimately feels wholly satisfying and tight, responsive and impactful.

Managing a party is vital to success in VK3, specifically because of how challenging it can be at times, and remarkably so thanks to the team-AI that exists somewhere between barely competent and downright moronic. Thus, knowing what a character’s personality is integral to achieving success. Party members each have distinct personalities, or combat styles that affect how they behave in such battle. Of course, that’s not the only aspect of fellow brothers-in-arms to keep up with — gear is perhaps key to any victory in the game. At the end of the day, VK is a loot-based series. and this installment continues this trend, making earning weapons, armor and items a fundamental and rewarding part of the experience.

Outside of all that, one of the best parts of Valhalla Knights 3 is its extensive class system. While only a handful of base classes are available upon character creation at the start of the game, there are ultimately 20 to unlock and use. The classes felt surprisingly varied, each with their own set of skills and skill trees. While the trees weren’t substantially deep, it was nice that each offered a few branching paths to define what role that class would fulfil. To this end, VK3 clearly pays homage to MMORPGs, and is far better than all of its predecessors because of this level of customization. 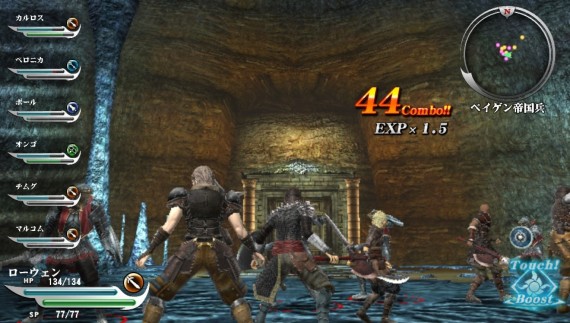 Also new to 3 is the competitive online component. Players can now take their 7-man party to the global stage and duke it out in 1v1 battles for supreme bragging rights. The online comes complete with leaderboards, stat-tracking, a rivals list and an extremely intuitive interface that makes linking up with others easy-peasy. Better still is the fact that our online duels had very little lag and for all intents and purposes ran smoothly. Outside of garnering esteem, players can also earn Arena Points for taking the fight to others. These points can in turn be used to purchase items that are a cut above the wares sold in-town. For those wanting local action, there’s an ad-hoc mode to boot. XSEED has done well with this implementation, no doubt. A cooperative mode would have been icing on the proverbial cake, but the mere incorporation of a multiplayer feature this solid more than suffices.

Before I talked about the gameplay additions making Valhalla Knights 3 feel like a true sequel more so than a marginal enhancement over past iterations. While those design concepts make the title feel that way, the graphical fidelity does just the opposite. When the Vita has games such as Gravity Rush, Killzone Mercenaries and even Dragon’s Crown in its library, a new game such as this is expected to fill those aesthetic shoes, or at least somewhat do so. Regrettably, Valhalla appears more akin to a solid-looking PSP game than one built for the PSV exclusively. Textures are muddy, animations are as stiff as a board much of the time, and there’s even the odd-case of slowdown.

The menu and interface aren’t appealing either. While they are markedly barebones for the most part, there’s a dash of lag when navigating the main menu. This is frustrating as much of the game is spent sorting out characters via said menu. On the topic of lag, Valhalla Knights 3 is plagued with load times, perhaps making this its worst characteristic. In town, we found ourselves skipping over certain spots just to avoid the barrage of load screens needed to endure when going from shop to shop. They’re not exceptionally long in their existence, but even with the short length, they break up the experience more than what’s ideal.

The audio also makes the game feel like it was ported from a PSP title. The sound effects, which absolutely tarnished Eldar Saga on Wii, are clunky, sometimes abnormally loud, and sound almost stock in most situations. Feet especially sound like tree trunks dropping on concrete (though, not to the degree of Eldar Saga) and voice-work, while sparse, never hits the notes it needs to in order to come off as anything more than mediocre. The game’s accompanying soundtrack fairs a bit better, however. It’s not Motoi Sakuraba’s best work, but it has its moments when it shines, making events feel tenser or melancholy depending on the compositions. The real problem with the OST isn’t its capacity to match a scene’s tone and message, as it usually does that, but that it’s extremely eclectic in design, making use of a multitude of sounds that come together to create a somewhat incoherent single piece of work.

When all is said and done, Valhalla Knights 3 is a roller coaster of a game. It has highs, lows and some inbetweens. Its core gameplay is spot-on, and fortunately so is the bulk of the entire experience. The class system, customization options and online features are downright fantastic. But qualities like its presentation, poor graphical fidelity, lousy AI, load times and throwaway story weigh it down in the end. As a result, fans of action-RPGs will want to check out Valhalla Knights 3, while those who don’t enjoy the genre won’t find anything here that will change their minds.