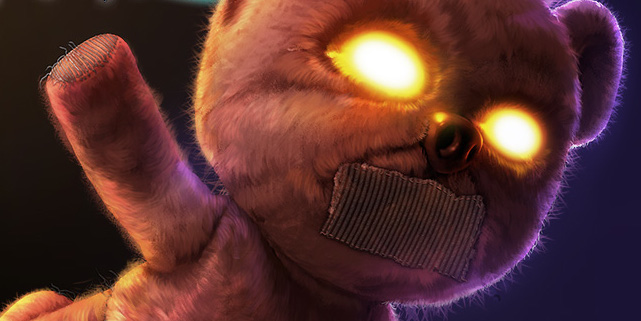 Given that the Bomberman has been a gaming staple since the 16-bit era, it’s amazing that there haven’t been more games inspired by it. Sure, there have been a few clones, but nothing that really took that same core formula and put a new spin on it. Now, Basement Crawl has done that with a darker tone to the same basic gameplay idea. It begins with a narration of a grand daughter and a grandmother talking strangely, leading to a shot of what is presumably the grandmother’s dead body and dialogue about them never being apart. It’s incredible creepy, and brings the really dark storytelling of Twisted Metal: Black to the Bomberman sub-genre. However, it does so without a single-player campaign. Instead, you’ve got a multi-player only setup and you don’t plant bombs, you place explosive presents on the ground to blow up. The core idea of the game would’ve been right at home in the early PlayStation 2 era while also making for a better “grown-up” version of the franchise instead of Act Zero.

Basement Crawl keeps the same basic “avoid trapping yourself in the path of the explosion” gameplay, so the transition from the light-hearted Bomberman to this is fairly seamless. Hopefully, you aren’t too tied to the idea of having cute characters to play as, because a demonic clown is about as cute as you’re going to get here. Some might be turned on by the chunky lass with a sack over her head, while the goth girl carrying a giant knife-wielding Teddy bear is a bit more terrifying.  It’s got some wrinkles to it that change things up a tad as well, like being able to kick and throw your exploding traps around. You can also run, but are limited to how much of that you can do by a fairly small meter. The key to that is to only use it when you’re surrounded by an explosion’s path, because if you can’t run out of that area, you’re doomed. For the most part, the game controls really well. Both the left stick or d-pad can be used to control your character, and the d-pad is definitely the best way to go. While running with L2 feels a bit awkward after so many years of using R2 to move forward in a racing game, it’s nothing a little training won’t fix up.

Speaking of which, you’ll definitely want to take on a dummy foe or two via local play because there’s no instruction of any kind offered up in the game itself. You can choose between local deathmatch or team deathmatch, or hop online for those same two options.  The bare-bones nature of the presentation, combined with the use of local and limited online multiplayer makes this feel like something that would be more at home on a mobile device. than the PS4. However, this does fill a niche right now as there isn’t a Bomberman game on the system, and even if there was, it wouldn’t be this dark. Luckily, there’s no lag, and being able to combine a local multiplayer session with an online one by bringing your friends into the online game is a nice touch that adds a bit of replay value. It’s easy to have a game session where you get all pissed at each other, then decide to team up for the good of the friendship and just kick some ass online. The game is greatly hurt by a lack of variety in modes, but if that’s corrected in the future, this should have some solid replay value. As it stands, you’ve got a bunch of samey maps that may look different, but don’t really play differently, and very few things to change to keep things interesting.

Much of that difficulty is due to the really dark setting and zoomed-out view. Every environment has an extreme color saturation of some sort, and while this does keep the stages looking a bit different, it’s also quite reminiscent of games like Loaded and Re-Loaded that relied on that to skate by — and players in 2014 expect more from things. The character models and environments are solid enough, but aren’t anything you couldn’t get on an early XBLA or PSN game. The zoomed-out perspective is much worse here than in Bomberman because there, everything’s lit. It’s much easier to see which character you are and where you are in relation to everything. Here, everything’s in the shadows and the characters that stand out on the select screen don’t do that as much in the game because you can barely tell which is which. If you’ve got vision issues, you’re better off skipping this because it’s way too tough to figure out which character you are and you’ll just wind up dying a ton.

Basement Crawl‘s visuals are faulty, but the sound design is superb. The opening voice acting is creepy, and the soundtrack is haunting. The most impressive thing is that the music doesn’t drown out the sound effects — allowing spookier effects like wooden shoes plonking along the floor and the squeaky wheels of the quartered crash-test dummy’s wheelchair to stand out. The devs definitely went for a horror movie vibe, but more of an ’80s mid-budget one that could at least have some good practical effects to it — and they succeeded here since everything you hear is at least unsettling.

Basement Crawl is a reasonably-priced, well-made game lacking the features to make it a must-have. It simply doesn’t offer enough as a multiplayer-only game to fully recommend as a purchase to anyone other than folks who are dying for Bomberman on the PS4. As a clone of that franchise, it has a refreshingly different art style and motif to it, but would’ve benefited from a single-player campaign to get into the story only hinted at in the opening cinematic. Fans of the macabre and Bomberman may be tempted to play it, but even if you’re pre-disposed to liking the game, you’re better off waiting for a sale.