Let’s get one thing straight: Flockers isn’t Lemmings. It borrows its share of DNA from the Amiga’s once-popular puzzle platformer (such as the aimless sauntering of the suicidal critters you’re tasked with supervising), and at first glance the similarities are glaring enough to draw a glut of comparisons, but Team17’s try at the somewhat-forgotten genre is most certainly the distinctive labor of love its artwork suggests. Its core mechanics — the arsenal of ability slots lining the bottom of the screen, the enormously sadistic trap setups, the addictive score chasing — result in an experience much greater than the sum of its parts. And for what Flockers lacks in originality, it more than makes up for in pure, unadulterated character.

Although the flocks of curious beasties — in this case, the same skittish sheep crated and shipped to worms’ bloody battlefields the world over — bear some semblance to the rodents of Lemmings fame, and the puzzles are largely interchangeable (save for a spinning sawblade or ten), it’s the steampunk aesthetic and tongue-in-cheekiness that carve a creative niche in the fleshy parts of both Team17’s source material and the company’s token franchise: Worms. Flockers retains the company’s cutesy art style that lends some footing to its otherwise grim premise, and though its plot is thin, it’s equal parts delightful and cheeky.

In Flockers, the goal is as straightforward as they come: guide your herd through environments the Department of Labor wouldn’t let exist in an ACME cartoon. Its walls practically bleed danger, and every facility (indoors or out) is a veritable butchery equipped with all the body dismembering blades, mallets, pikes and looming death you’d expect to find in an Eli Roth flick. Most of its lethal puzzles demand a brand of quick-thinking lost on modern games, and it’s never shy about boasting its oldschool trappings which, when undermined in the bustle of a playthrough, can easily effectuate the temple-flaring frustrations of any Flappy Bird clone worth its weight in poorly coded programming. What I’m saying is: Flockers is tough-as-nails, but it’s the type of difficulty you grow to appreciate as your skills sharpen noticeably throughout its 60 level campaign. 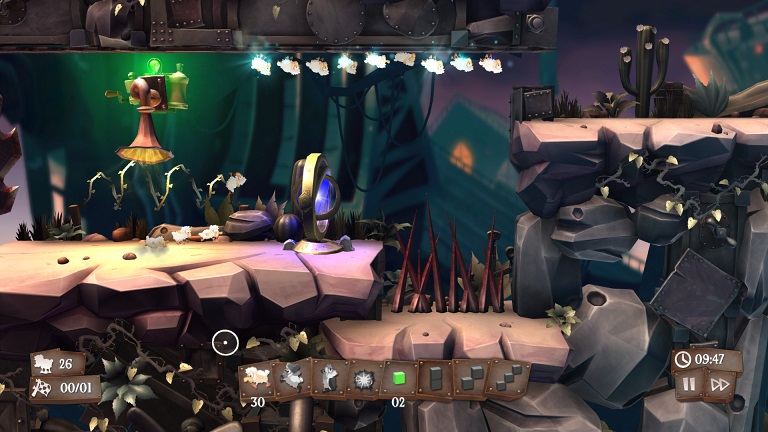 Thankfully, watching sheep leap to certain death has the sort of juvenile appeal that rarely gets old. It’s also an opportunity to scope the nature of any particularly thorny snags; something you’ll be doing more than enough of in Flockers, as simple momentary lapses in judgment can result in a forced-restart. Failing to notice changes in the environment, for example, such as gravity and teleportation panels (or even expending commands too liberally) will treat your eyes to the bloody arterial gushing of your fluffy friends.

Outwardly, strategy is the name of the game and its simple rhythms paint a facile undertaking: Flockers arms you with a patchwork of sheep shepherding powers; blocks on which your critters can climb, skills with which they can progress through levels (jumps , flight capes, some nifty scaling formations and the outright blocking of routes make up the basics), as well as the ability to explode sheep on command — something of a late-level requirement in advancing through various wobbly barricades. These abilities are littered in boxes around levels and are available in limited quantities, so conserving and managing resources is important in preventing the untimely slaughter of sheep.

Flockers’ level design can be both immensely satisfying and incredibly confounding, almost synchronically. Solutions are often obscured by more discernible pathways, and the game rarely plays fair in preparing you for the next round of smashing, slicing or squashing. Panels, too (such as the teleporters), don’t feature any distinguishable indicators and more often than not end up leading your flock astray. The key is timing, and as various dangers trigger at random, the pause button becomes paramount in surviving long enough to interpret any given levels formula.

Boss levels, of which there are only a handful, further intensify the straits by pitting you against some mechanical monstrosity or another, and later levels demand a nail-biting precision for a shot at a 3 star rating. While outcomes are often irksome (and you’ll no doubt replay the same few extra-challenging levels dozens of times), those moments of unmitigated failure hardly hinder an otherwise polished and well-oiled design. Flockers’ stages are also highly replayable, with a quick to complete/long to master structure that serves it’s gameplay model nicely. 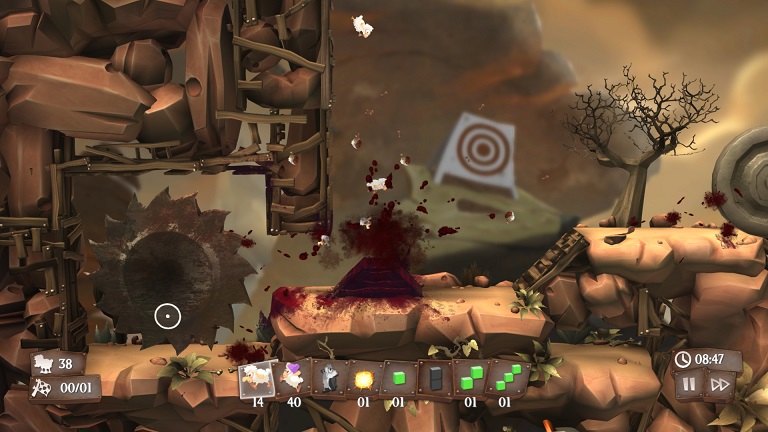 Without flashing PETA’s save-the-bat signal, it’s hard not to chuckle as a flock of sheep face the spinning jaws of slaughter-by-sawblade. The animations are charming, the backdrops are pretty and there’s a clever — albeit slightly aggravating — design to its sprawling, puzzle-centric stages. With a full-fledged editor and Steam Workshop support in the mix, there’s bound to be a generous helping of imaginative community content to expand your experience with (and share your own creations, too). While it doesn’t function as efficiently on consoles as it does its rightful platform (PC), controls are hardly ever to blame for minor mishaps. The bottom line is: Flockers isn’t for squeamish gamers expecting a glorified iPad game. It’s for the thinkers; the true appreciators of fine-tuned designs and engaging puzzle solving. It’s satisfying, refreshing and, most importantly, an incredibly fun romp through Team17’s take on a classic.