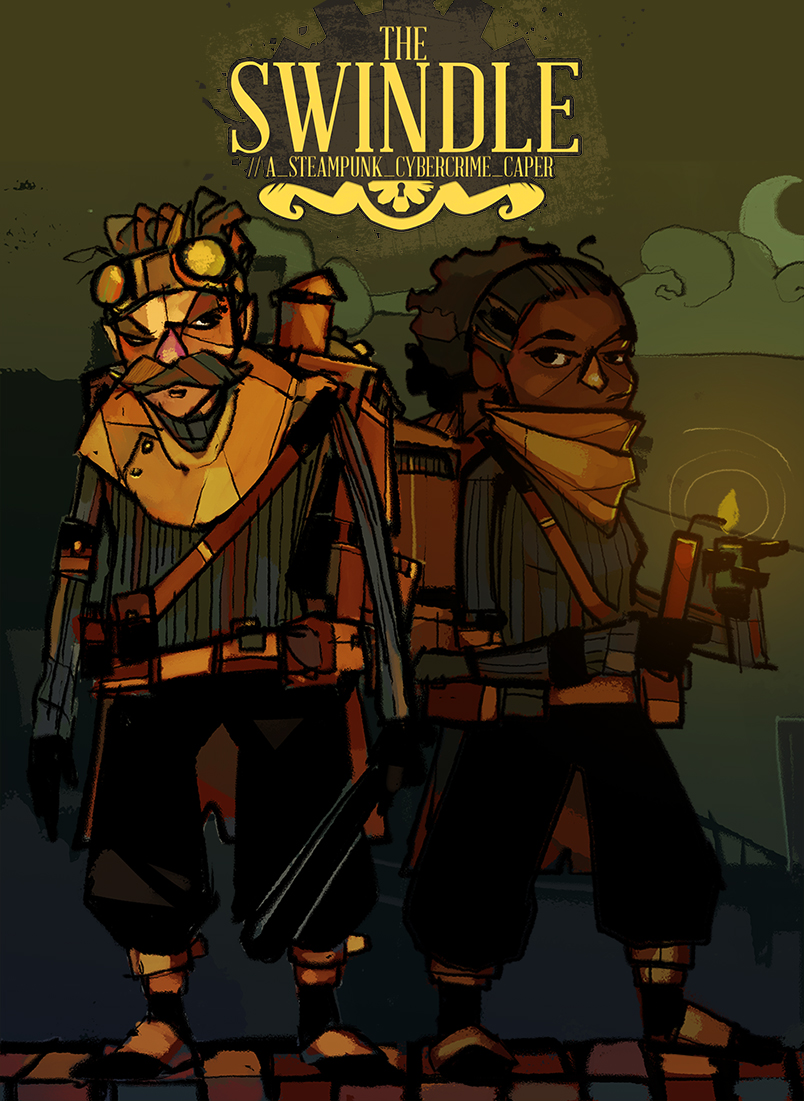 Stealth is a relative thing. Generally, when being sneaky, the trick is to flit through the world like a ghost, never being seen and only dropping from shadow when absolutely necessary. In The Swindle, on the other hand, stealth is there as a tool to ease bludgeon your way to a big loot payoff, dropping from walls to smack unsuspecting bots in the back of their tin skulls. Plundering the cash from a warehouse, mansion, or casino requires a certain level of subtlety, but it’s only a single tool in a large arsenal that will see you platforming and bludgeoning enemies with all the sneaky grace of a one-man marching band.

The world of The Swindle is about to get locked down hard. The British government is on the verge of unveiling an all-knowing, all-seeing security system called The Devil’s Basilisk, and you’ve only got 100 days to stop that from happening. It won’t be cheap and it won’t be easy, but a little illicit cash can go a long way in the hands of a skilled burglar. As a criminal mastermind you control a series of thieves breaking into buildings, defeating their security measures and making your way out with as much cash as you dare to carry. Money upgrades skills and tools, allowing bigger heists, which open up new and richer areas of the world. New areas of the world, however, are stocked full of all-new robotic guards that will cheerfully kick your poor thief’s face in without a second’s thought. The only way to learn their behaviors is trial, error, and careful observation. That last option has the best chance of success, but sometimes you never know how a robot will react until you make a move.

What this means in practice is that your thieves end up expendable. The Swindle is not an easy game to get to grips with, and while its inconsistent controls don’t help with the difficulty, the main cause of employee churn (which sounds so much more professional than “death”) is the law of unintended consequences. Initially the run to The Devil’s Basilisk is pretty simple, thanks to starting in the poor section of town with a low-skill thief, so there’s not much that can go wrong other than standing out in plain sight while the sight-cylinder (which is like a sight cone except apparently robots have zero peripheral vision) passes over you. There are computers loaded with money waiting to be transferred to the master account, but that’s locked off to begin with, so the best you can do is grab the stacks of cash and club a few bots from behind. The thief has a single jump, can hop up walls or hang on to slide down them, and has no bonus multiplier to the final cash take. That’s going to change quickly once you’ve taken the first £100, though. 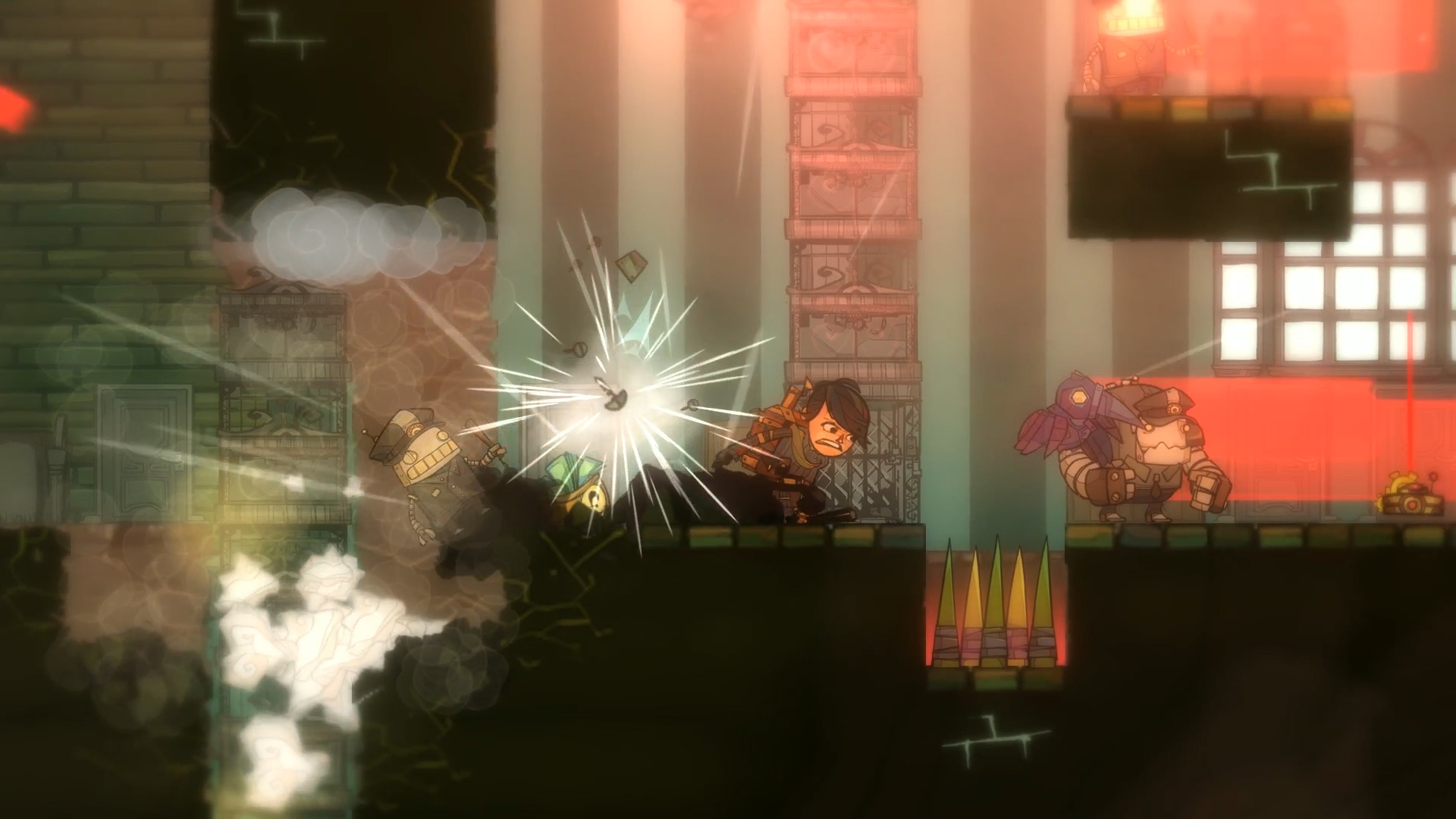 That first tiny score opens up the path to pulling in the major heists. The cash people leave lying around is a nice bonus, but the real money is tied up in computers scattered around the house. It’s the difference between leaving with a few hundred and several thousand, enabling you to buy new skills, tools, and access to richer sections of town. It doesn’t take long to earn a double jump, faster hacking, bombs, the ability to hang off walls rather than slide down them, and many other options for the well-equipped burglar. Every purchased skill and tool bumps up the difficulty level a little, though, so at no point does a heist become a cakewalk. The price of having a richer set of options is needing to use them well.

While this progression is good for a single run-through, those 100 days that seem like forever at the start get whittled down to nothing fairly quickly. Starting over with nothing isn’t bad the first time or two but, The Swindle doesn’t feel like it’s really started until after buying hacking, double-jump, and bombs. There other skills make the thieves seem properly versatile, with wall-hang in particular being useful in any number of situations, but it would be nice to be able to put in a bookmark to restart a few days into the calendar but with the basic skills already available.  Thankfully it doesn’t take long to earn the cash for these upgrades, but the game doesn’t feel like it’s properly started until you have them.

More troubling is the controls, which are still a work in progress with one patch already released to address certain issues.  The post-patch version I’ve been playing still has problems, though, especially in relation to wall-grab and momentum mechanics.  Jumping is vital but relies on  running momentum for distance, and that can take a second to kick in.  Why this matters when you’re on a stationary wall is anyone’s guess, though, and I’ve died a couple of times from fall damage due to not being able to grab the opposite wall inches from my face due to a jump distance measured in centimeters.  The other problem with the wall grab is its unreliability, sometimes not kicking in and others giving an unwanted jump-boost right into the line of sight of a patrolling robot.  The controls work often enough that it feels great to pull off a perfectly-executed heist, but very little is more maddening than leaving with a giant stack of cash only to lose it all to a jump that didn’t do what you told it to. 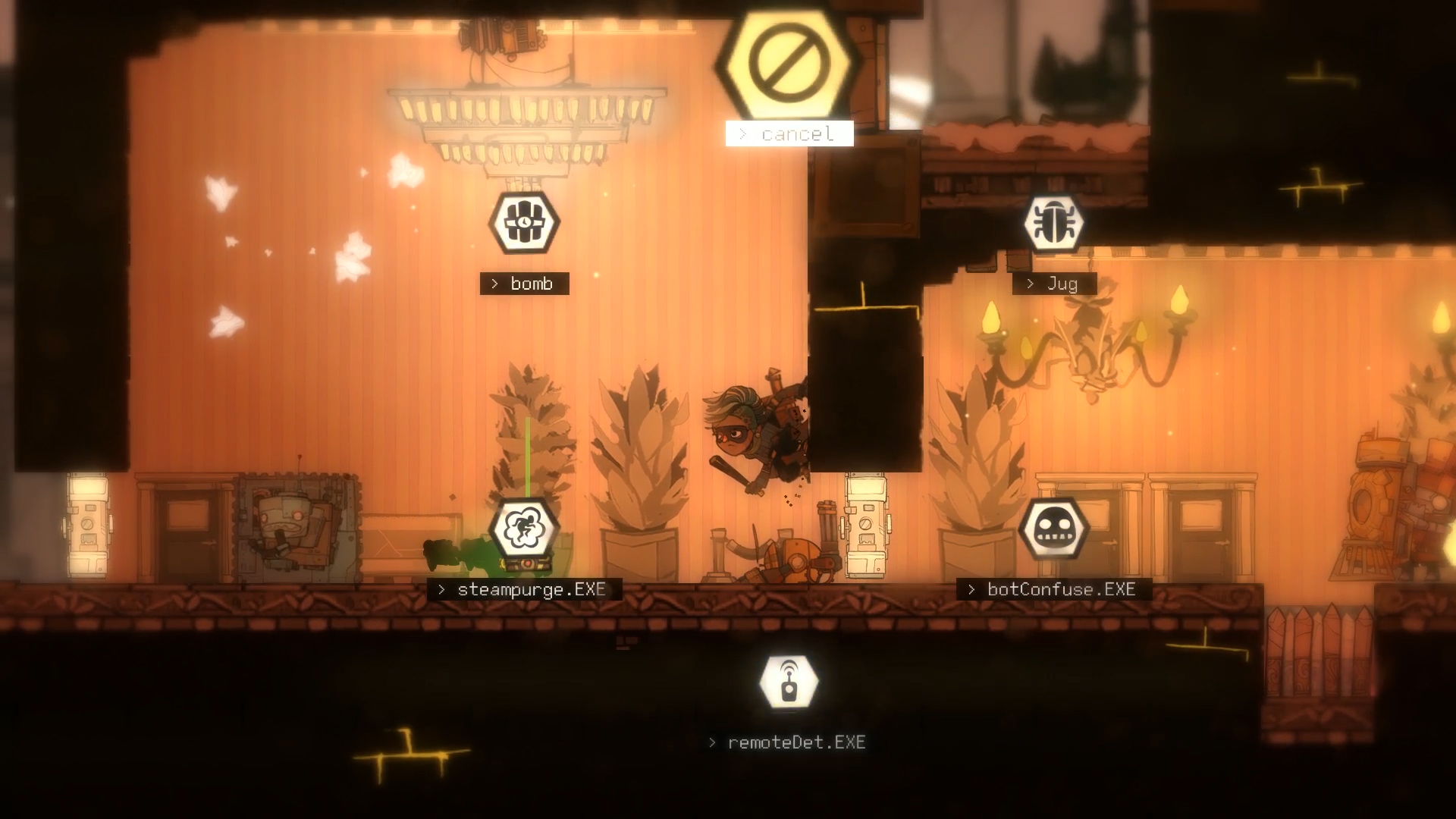 It’s hard to fully recommend a game with inconsistent controls, but The Swindle is awfully close to being excellent.  There are a huge number of enemies with different behaviors and the randomized level generator is more than happy to put multiple kinds together in ways that require different strategies to handle.  The art style not only serves the game well, but also looks sharp when the camera zooms in during the hacking mini-game, revealing detail and linework that gets lost on the normal pulled-back view.  The simple set of skills slowly expands into a large set of tools, with plenty of options to use them in a variety of situations in ways that aren’t instantly obvious.   When a heist goes well, with each situation requiring a combination of sneaky stealth and quick action using strategies developed on the fly, it makes you feel like a master thief who views the most restrictive security measures imagineable as little more than toys to be batted around for your own amusement.  Even an infrequent control failure is maddening when the difficulty is cranked up and every inch of the level is covered in cameras and patrol-bots, though, so until The Swindle sorts out its issues, it’s going to have to be merely decent rather than the excellent it could have been.