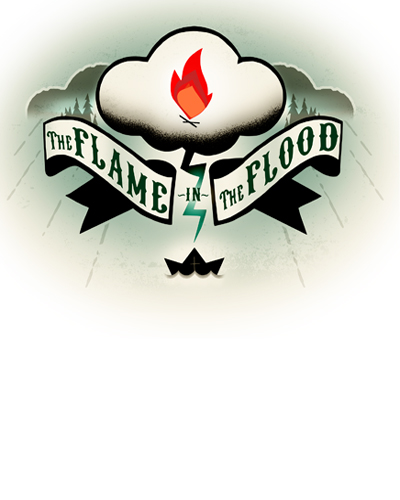 The Flame in the Flood

Simultaneously charming and terrifying, The Flame in the Flood marries a unique art style and refreshingly different setting to familiar survival game mechanics, creating an experience that feels genuinely new. Developers The Molasses Flood wisely focused on refining their vision rather than broadening it, so that while The Flame in the Flood concentrates on suggesting one, small story — that of the Scout and her dog surviving as long as possible as they navigate the challenges of a river journey — somehow the end result feels just a little epic.

At its core, The Flame in the Flood is a survival roguelike game, a journey down a river somewhere in the South, sometime after the collapse of society for one reason or another. The detritus of society is everywhere, from rusted automobiles to derelict refueling stations, from half submerged sections of freeway to the dozens of floating ramshackle homes floating by. Whatever happened, it left a few survivors — some of whom Scout will meet along her journey — and lots of stuff to pick up and use, and lots of animals. At the beginning of her journey, Scout has a rickety raft, a companion dog named Aesop, and not much else. She floats down the river, hits some rapids, and navigates towards docks. She scours each location for materials that she can craft. Everything she finds has some sort of utility. Cattails can be woven into rope. Rope and branches can be fashioned into traps. Fungi can be transformed into penicillin. From the start, all of the potential items and recipes are searchable, but of course they’re meaningless unless component materials can be found.

The process of crafting items — whether they be food, weapons, medicines, better clothing, or upgrades to the raft — is there to help Scout to survive and fend off the effects of hunger, thirst, temperature, fatigue; to cure wounds or fight off the predatory animals she encounters. There is nothing neutral in the world: everything is there to help her or hurt her or sometimes both. The developers have suggested that The Flame in the Flood was built on the “rule of three:” you can survive not breathing for three minutes, not having adequate protection from the elements for three hours, not drinking water for three days, and not eating for three weeks. Whether or not that is literally true, the game constantly challenges the player to address those basic needs, because to ignore them proves fatal. While crafting is one of the game’s core mechanics, the process of crafting could be simplified and streamlined and automated. 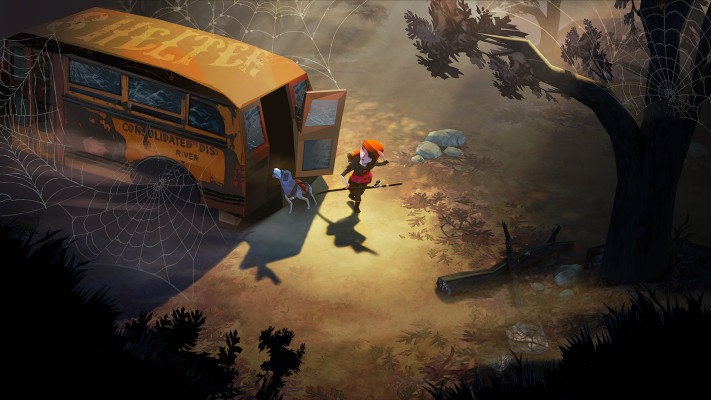 Because this is a roguelike, procedurally generated and rooted in something like the reality of actual wilderness survival, death can in fact come at just about every bend in the river. In the game’s Campaign mode, there are checkpoints so that death doesn’t mean a total restart, and any items stored on Aesop remain available. In the game’s Endless mode, death is permanent. There are many ways to die in The Flame and the Flood, from hunger and thirst, to drowning, animal attacks, infection, exposure, and lack of sleep. The game’s moody and beautifully rendered day and night cycle and weather effects aren’t cosmetic, but have real emotional resonance and gameplay significance. Seeing a warm dawn light is truly encouraging after surviving a cold night filled with predatory wolves circling at the edge of the campfire, but it also helps raise Scout’s temperature and stave off the effects of hypothermia. 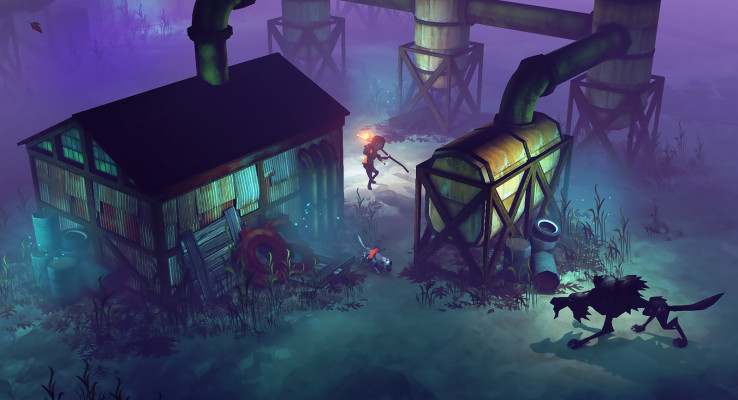 The Flame in the Flood looks like a dark southern gothic picture book, with just enough detail in the world and painterly lighting effects that help shape the mood of every frame. The characters are somewhat distorted and abstracted yet their body language and animations carry a lot of emotion. The musical score by country folk artist Chuck Ragan is lonely and hopeful, with aurally iconic acoustic guitars and blues harp suggesting the game’s Southern setting.

While human characters appear from time to time along the way, usually to barter goods, the story is largely told through the environment and while the campaign mode has some specific tasks to complete, there isn’t a compelling arc of story beats to experience. Scout’s survival becomes more precarious the longer the game goes on, despite her growing inventory of tools and weapons, as materials become harder to find and the odds against her grow greater. Like many roguelikes, The Flame in the Flood can feel unfair, especially in the first few minutes. Encounter wolves, for instance, on an early land excursion and it’s game over. If the raft is in poor repair and you didn’t happen to snag those nuts and bolts as you floated by them, there isn’t much you can do but hope you can avoid the mountains of rubble that crowd the river. 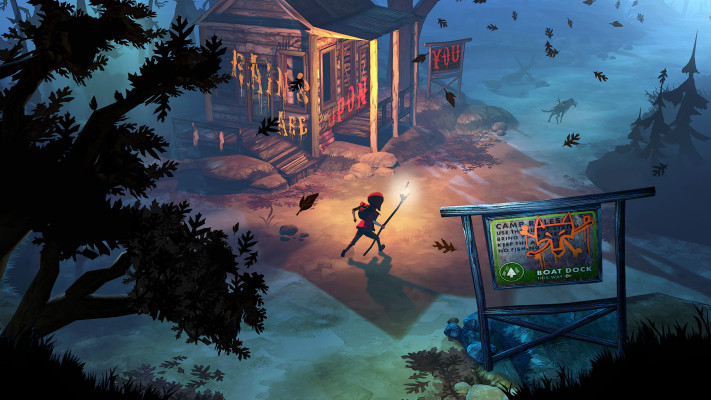 Death is pretty much inevitable in The Flame in the Flood, but it can be held at bay through luck, crafting, planning and skillful awareness of the environment and what it offers and hides. There is tension aplenty and moments of beauty and triumph — or at least relief — as well. While the crafting mechanic offers the potential for creative problem solving, the process can also get monotonous in a longer game. While some might argue that the ambiguous setting leaves the story open to interpretation and player imagination, a stronger narrative context and a few compelling story hooks along the way would have been welcome. Still, The Flame in the Flood offers a genuinely new variation on the survival game theme, tuned, focused and confident in its execution.