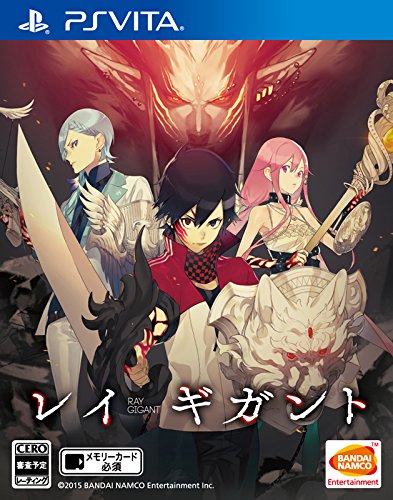 Anyone who has read any content created by this writer would never make the accusation that regarding intelligence, I am on the same echelon of people who can best Stephen Hawking in a battle of wits.  There are, however,many people dumber than myself.  With years of experience with video games, I like to think even if I can’t figure out how to beat a game, I can at least figure out what genre said game is.  Ray Gigant, a JRPG dungeon crawler, actually had me convinced for roughly an hour it was a visual novel.

Like many role playing game, Ray Gigant has a lengthy introductory sequence explaining what is going on.  Lengthy may actually be an understatement.  There was not an in game timer to monitor exactly how long it went, but an hour is not an inaccurate approximation.  Upon completion of that, the character enters the first dungeon which also serves as a tutorial.  The first hour and a half to two hours are an exercise in patience; that is not to say they are not enjoyable, just not too exciting.  Players who do get past the long introduction and the training wheels part of the dungeon have their patience rewarded with a worthwhile game.

The game takes place after a cataclysmic invasion of some large creatures known as Gigants.  A teenage boy, Ichiya, finds himself at a school that is really a front for a base used by a group of people who are battling the Gigants.  This is where Ichiya learns that the voices he has been hearing are actually an artifact he took from a shrine called a Yorigami.  Ichiya’s relief that he does not have schizophrenia and he has something that can be described as a godlike parasite bonding with him is short lived as he and a couple other “students” have to go explore a megalosite to take care of some Gigants. There are two major parts to this game.  The first part is the story sequence, and as far as time is concerned this is probably equal to the portion of the game where the player has some control over what is going on.  The story is told through dialog with the a static image of the speaking character.  The story itself is interesting though it can be long winded at times.  This portion just requires to press X to advance the dialog and all the player can do is wait for a part to end.  Chances are the next area you travel to will be more expository dialog before you are able to take control in the mission of Gigant slaying. 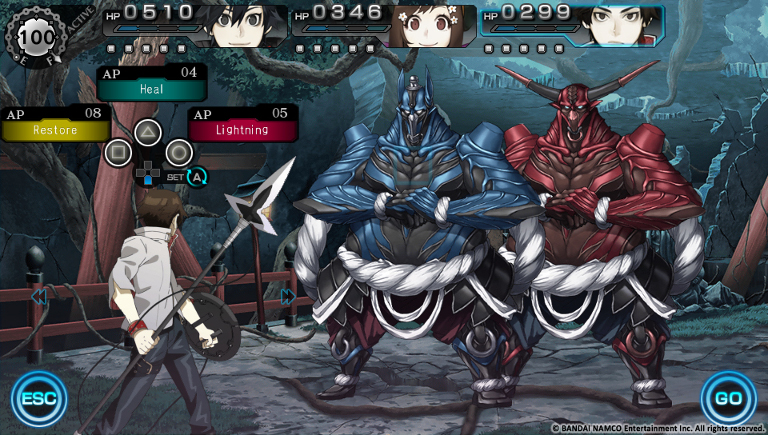 The gameplay itself is a successful amalgamation of RPGs elements mixed together.  Dungeon exploration is done in the first-person perspective where the character move about a grid.  There are no random battles; Gigants are marked on the map so there is the option of avoiding some fights should the player desire.  Battles are fought in a fairly traditional turn-based system.  The battle system is reminiscent of Bravely Default without being a rip off.  There are three party members that share a pool of action points.  Action points are regained either by choosing to wait or receiving damage from the enemy.  It is up to the player if they wish to burn through all AP in one round or ration them out strategically.  A counterbalance is healing items do not have a finite quantity and magic spells do not have a separate MP pool to worry about.  All actions requires AP, so depending on the battle, it may be wise to have one or two characters just wait to replenish AP while the others spam an attack that exploits the particular enemy’s weakness.  An added challenge is the AP cost can vary between light, normal and heavy depending on Gigant color.

Having a wandering deity for a parasite is something of a double edged sword.  An advantage to this is being victorious in battle fills a separate pool of points that lead to the ability to activate the Slash Beat Mode.  A limited version can be done at 50 points, a more drawn version can be done at 100.  100 is unfortunately the cap so they must have taken into account there would be players like this reviewer that would try to amass 500 and just spam the major boss Gigants with it.  Slash Beat Mode is a rhythm based mini game.  The amount of damage dealt is based on how well the button presses are timed.  Being able to charge up a fun minigame of death is a nice perk, so to off set that there is the dreaded Parasitism.  This is what happens with the Drive meter reaches 100% and the Yorigami goes temporarily nuts.  During this mode the player still has full control of the characters, but health points are used to power attacks instead of AP, so this can lead to untimely deaths.  On the flip side, this is also a good opportunity for the strategic minded player to get massive AP recovery since all health is restored to surviving party members after each fight. 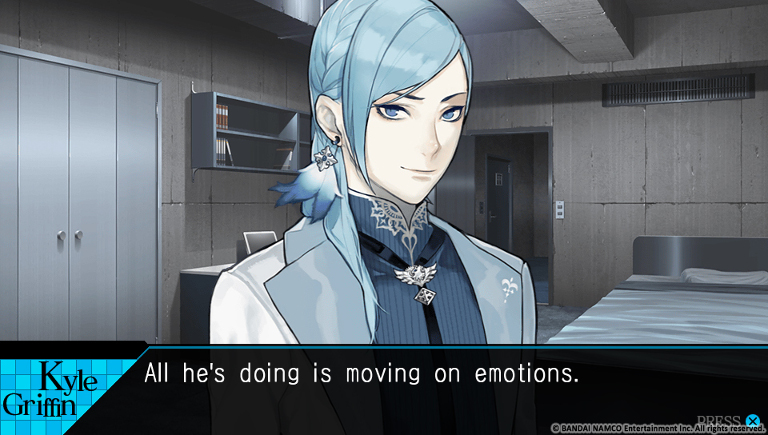 Waging war against otherworldly behemoths is going to build up an appetite.  This is not the first game to play with the relationship between food and body weight but it does offer its unique take on it.  Certain foods cause weight gain and certain foods cause weight loss.  Exploring dungeons and battling Gigants is the miracle weight loss system since the kilograms just melt off the characters in the dungeon, so they need to constantly eat in battle if they want to keep weight on.  This is fairly easy since they have unlimited food and their appetite is only limited by their AP.  Weight gain causes bonuses to physical damage and defense, whereas weight loss causes bonuses to hit and evasion.  Stocky or svelte both offer advantages, it is just a matter of tailoring them to the specific character’s battle style.  This game is body shaming free zone where all weights offer some kind of bonus.

There are three main characters who have interconnected stories.  The first few chapters focus on Ichiya, with later chapters centering on Kyle and he is followed by Nil.  The multiple main character storyline works for this game.  Given that the Gigant invasion is a worldwide calamity, having characters from different countries coming together to deal with them and not always on the friendliest terms helps to broaden the scope of the events.  It also shows characters having to form alliances in the name of humanity triumphing over the invaders, forcing them to put their personal differences aside at least for a little while.

Overall this is a good game that I would recommend for JRPG fans, but it is not without its flaws.  While it does have a good story and its method of telling it is effective, the ratio of story development to actual play time sometimes falls too heavily on story emphasis.  The loop of twenty minutes of dialog to twenty minutes of dungeon crawling can get repetitive, especially during extended play sessions.  In some segments the developers tried to certain twists to the formula to help break up the monotony, but these approaches are not always the most enjoyable.  An example of this are the warp spots in Chapter 12.  When the characters talk about how this section is frustrating and stressful, the player is likely to agree.  While not perfect, the good does outweigh the bad. 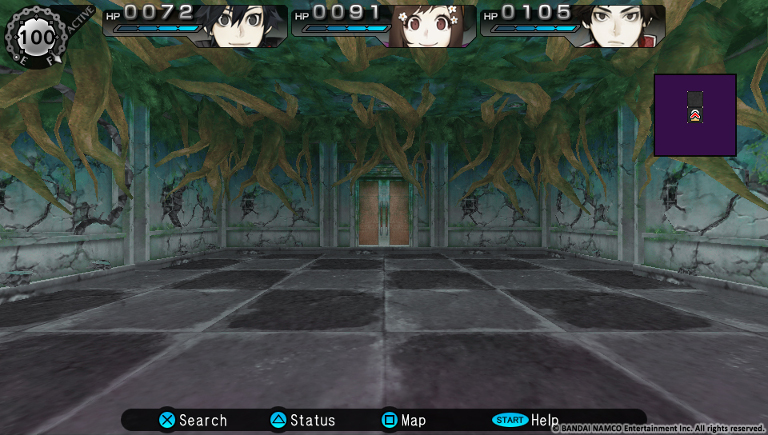 Ray Gigant takes some risks in game design to create a unique JRPG experience.  Some of these are executed better than others, but the overall game is solid.  It does take about two hours to really show its potential, but the payoff is worthwhile for JRPGs fans.  Depending on how long a person’s gaming career has been will factor into what various games show their influence, but the developers were able to combine the influences and create a fresh experience.  The storytelling emphasis may seem excessive to some, but it was able to hold this reviewer’s interest who generally has the attention span of a squirrel on massive amounts of stimulants.