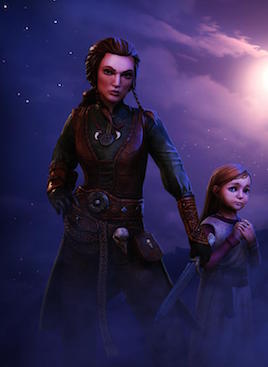 Stealth games are an odd bunch when you come to ponder just what makes that objective formula that guarantees success. So long as, you might assume, said genre executes the act of sneaking one’s way through particularly puzzling and tense moments — and leaves it feeling enjoyable — the rest is mere window-dressing, right? But as we look back on recent history, not all stealth games play to the same rules and it’s interesting to see the varying priorities in some of the most acclaimed titles create equally proficient experiences. While Metal Gear Solid & Splinter Cell may put most on the focus on their deeply layered but immersive gameplay mechanics, others such as the Thief series or even recent newcomers in Dishonored tend to weave art direction and aesthetic in tandem to leave their pseudo-fantastical settings linger a little longer in humble memory.

Shadwen, by developers Frozenbyte, is an odd fit for stealth…but a good kind of odd. The kind that borrows from established favorites and attempts a new spin on the convention of sneaking past patrolling, cone-vision AI (and succeeding in moderate portions). It doesn’t quite warrant the hallmarks of a universal must-play, yet much like how Superhot inverted the first-person shooter in terms of structural philosophy — becoming more a puzzle game than a shooter — Shadwen at points feels more like a platformer than your typical stealth offering, but intrigues for that very reason. Like the acclaimed puzzle-shooter then, players are given the chance to plan ahead, albeit a few seconds ahead, via the game’s centre mechanic that when you stop, time stops. Further to that, flittering to the fargone days of Prince of Persia, failure in being spotted or simply regretting a decision can be instantly rewound, meaning you’re constantly in perpetual flow but are wiser because of it.

For those expecting a compelling or be it interesting tale spun from out the fantasy mythos will be left sorely disappointed however. Even the brief passage of hand-painted stills that act as cutscenes and the questionably static voice-acting, feel more like tide-me-over’s rather than a necessarily embedded story or plot taking place. The fact that exposition comes and goes in-between gameplay, specifically during these acted-out recordings masquerading as narrative, demonstrates the significantly lesser staying power of the story when compared to what essentially becomes another “x amount of levels to play” category of independant games. 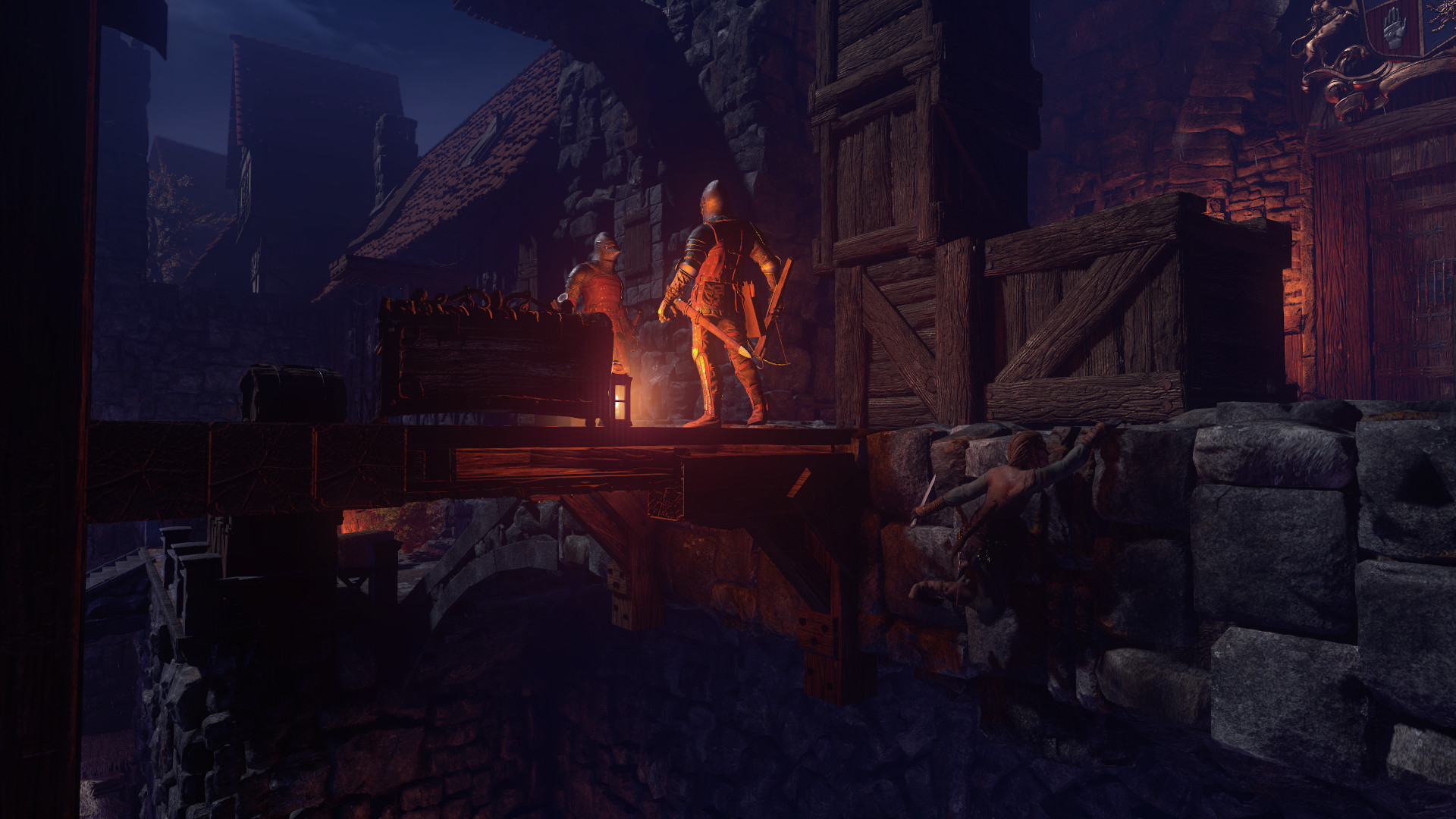 But as far as gameplay goes, it’s clear Shadwen wants to offer its player a helping hand without imposing too hard on the challenge unfolding. As players progress through the dozen-plus areas that encompass all the stone-built, wood-framed, straw-insulated medieval aesthetic, the World — while not entirely unique — warrants enough of an investment to see how the next region will play out, in both looks and interactivity. It’s the way it all fits and connects together through its subtle changes in architecture or design that maintains a prominent feeling of progression, if not of a personal sort. There’s very little complexity or even elaborately diverging opportunities amidst all this, but much like how Bloodborne (which even I’ll admit is quite the comparison to make to a game like this) cleverly added further thematic and contextual weight the further you ventured in, Shadwen is almost a microcosm of that same mentality for how it feels constant with its tonal transition.

As such, the lack of any stark contrast of environments is a smart fit for a genre and playstyle that emphasises the need to take one step at a time and meld into the World you’re doing your best to hide within. In terms of your actual objective, the object props on show work in much the same standard as you would expect from a stealth set-up. You move objects, you make noises; you distract guards as a result which then gives you the opportunity to pass and repeat the cycle. There’s little venture outside of this simple template and while the game may feel heavily bogged down by its reliance on staying within its comfort zone, neither does it leave Shadwen consequently falling victim to some stale repetition without reward. 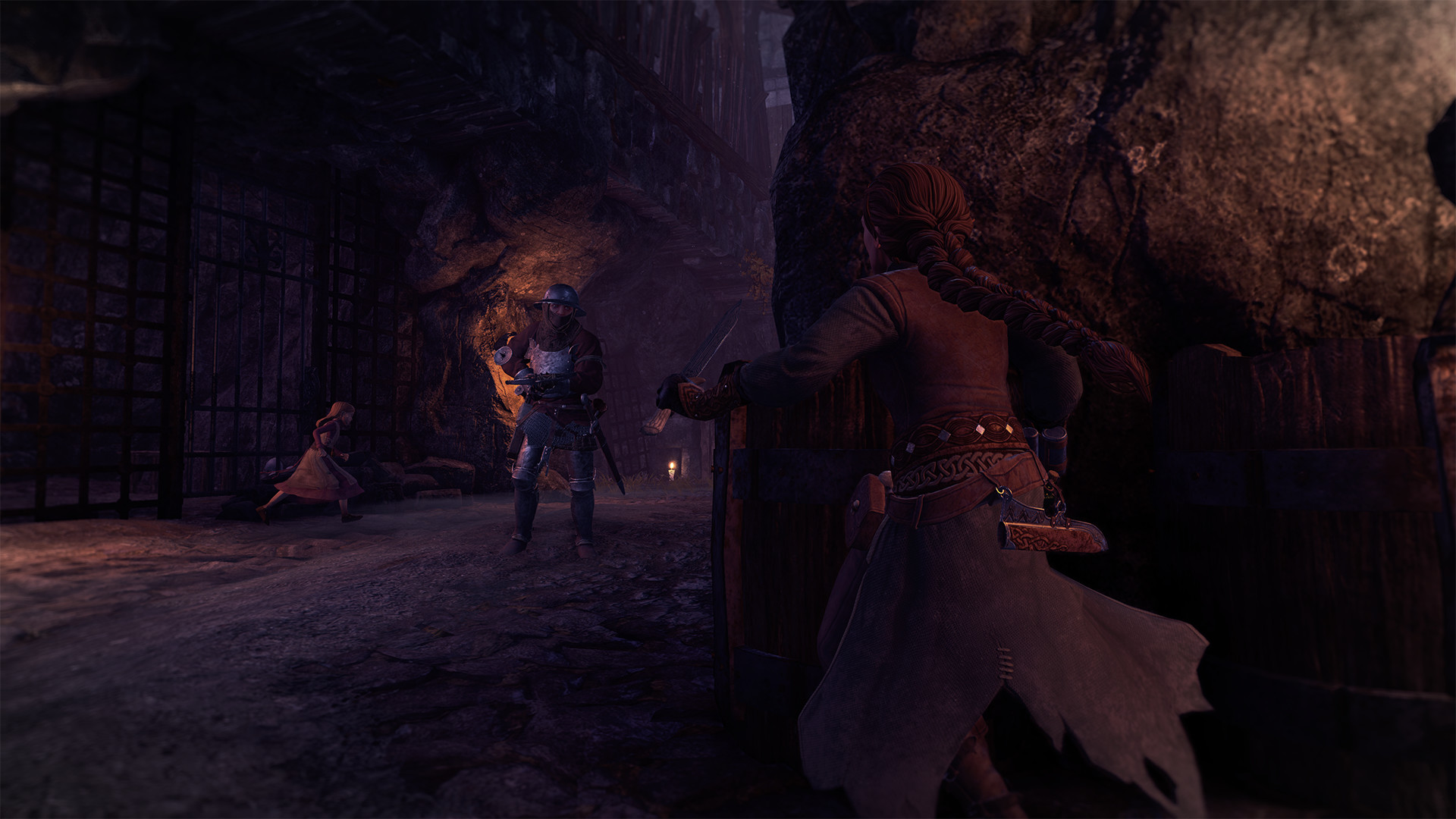 Coupled with the ability to vertically navigate the surroundings by making use of your grappling hook — perching one’s self atop high platforms Assassin’s Creed/[Arkham] Batman style — and the gameplay offers up a sufficient level of dynamism in how you approach a set objective. But the most prominent feature to Shadwen‘s individual moments (and this will take many by surprise I guarantee), is the escort-esque set-up and how that works in conjunction with player decision. It’s safe to assume the so-called “escort mission” has never been one element to rave on about in games and while you will sneak your way through the game with a secondary AI-guided character following suit, Frozenbyte have pleasantly (for the most part) added further depth by making your actions feel relatively critical when guiding your accomplice safely through. When confronting enemy guards, you have a choice — as you so often do in the stealth genre — to take either the sneaky approach or the lethal equivalent.

While it’s relatively easy to kill off each unit and safely make it back into hiding, not only will guards make sneaking near-impossible should they find a dead body and subsequently raise the alarm, the game carries with it a gentle persuasion that stealth is often the best approach to take. Whether this be the upscale in difficulty upon (for lack of a better term) an alert phase — and the fact you can’t simply patiently wait-out the invisible timer until all returns to normal — or the fact your actions will ultimately have an impact (or so says the game) on your character relationship, Shadwen constantly sends out hinting reminders to think before you act.

So it’s unfortunate then to find all the promise and potential end up incredibly weighed down by the game’s often inept technical stature. The way enemy AI react and the way such obvious fallacies in the game’s animation and all-round hit detection play out is a hard instance to ignore — the former offering blatant lapses of sensory awareness, especially when you watch your ally run straight through a guard’s field of view, with the latter incurring constant animation clipping and rather whacky instances of physic-defying rope-swings that pull away from the tone easily gripping the player. 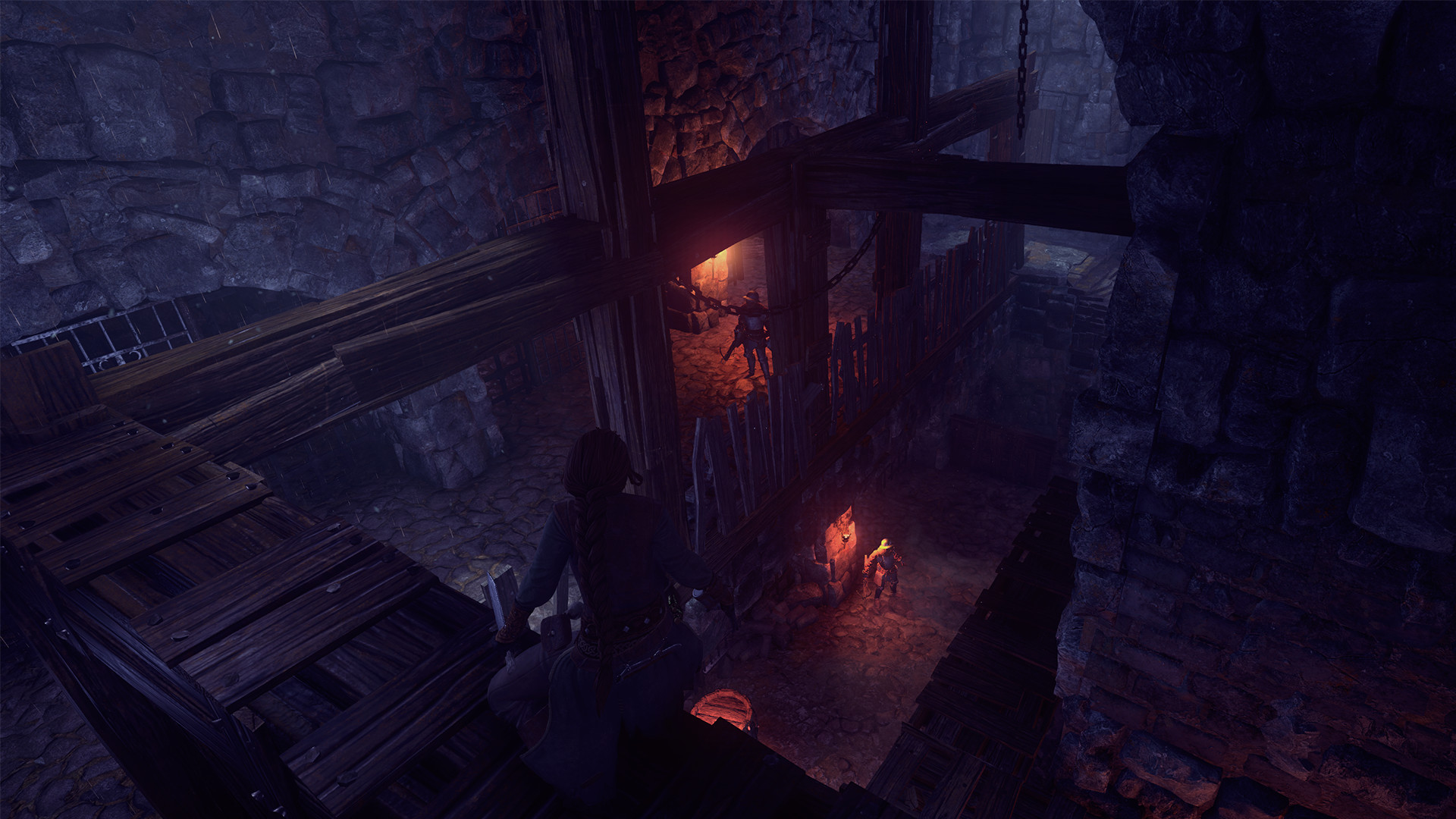 The real essence of Shadwen‘s overall delivery — and as a result the enticement to keep playing — is how tactically-focused the stealth is. It’s not quite as diverse or as intelligently-arranged as many AAA outings go, but neither is it embroiled in some crisis of identity. Coming away from it all, Shadwen is an interesting if not unique spin on the slower-paced and more tentative approach to third-person stealth and had it not been for the horrid recurrence of animation clipping and a story that ultimately feels flat and rather half-baked, the resulting whole might have been perceived as a lot more favorable. Nevertheless, a satisfying game in doses, Shadwen does enough to warrant repeat returns and while it lacks visibility beyond the central pillar that is its gameplay, it’s said gameplay that keeps the game from fading completely out of sight.