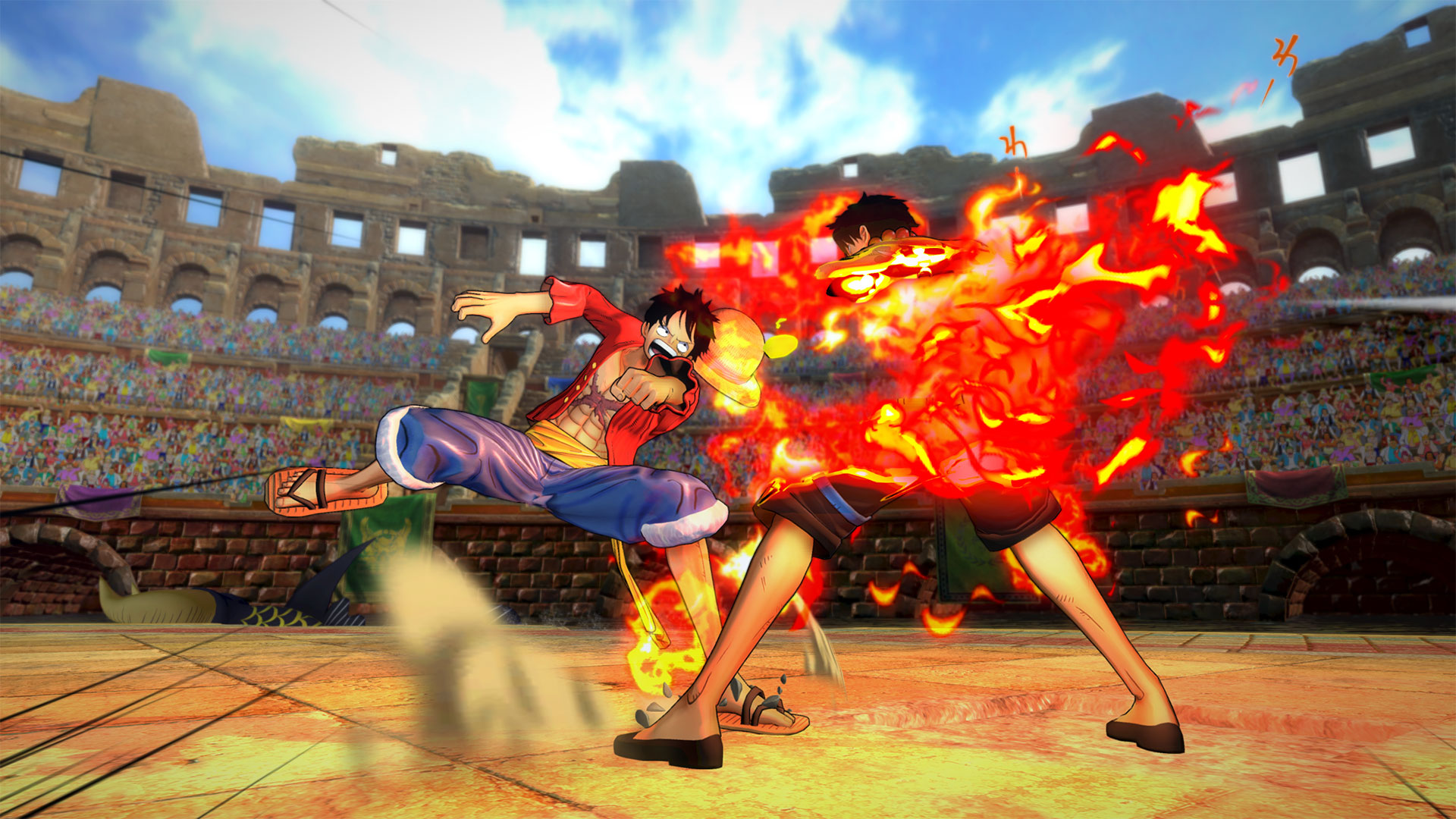 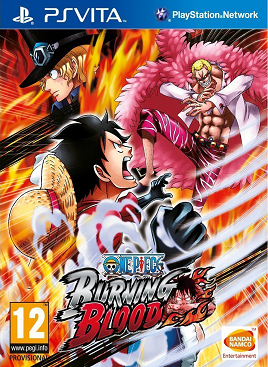 Bandai Namco’s house has numerous supporting beams keeping its structure standing. The primary load bearing pieces in the construct are the fighting games, like Tekken, and anime titles, like Sword Art Online, Dragonball and others. It makes sense when they combine the two, as they have done numerous times in the past, and there’s even been some decent outings (there has also been some terrible ones). Their latest, Spike Chunsoft’s One Piece: Burning Blood, falls squarely in the middle, insubordinately defying anyone to praise it or hate it. Like a petulant child with poor parenting, it just can’t be put into a convenient corner.

The primary focus of the game in the beginning is the story mode. This all takes place during the Paramount Wars arc, where Luffy and company are fighting to save Ace from execution at the hands of the Marines. The large scale battle is a well-chosen backdrop for a fighting game story mode, as there are numerous clashes that can be worked in without stretching the fiction too hard. This is a time for a quick confession, though: I have never watched an episode of One Piece before playing this game. The ins and outs of the relationships were lost on me. Why Kuma looks the way he does makes as much sense as why I am allowed to write for a professional gaming site. It just is. (I am now three episodes in, approximately three hundred and twenty hours of show to go before I am caught up).

The story is doled out in brief chunks. The player selects a stage. A brief synopsis is given before an in engine cutscene is shown. Then there is a fight. While the cutscenes are entertaining, the bare bones intro doesn’t do the story any favors. Much of the emotional and comedic heft is excised because of this method. Still, the goings on could easily be followed by someone without prior series knowledge, but these scenes seem to be there to remind the fan of the set up to the next fight. 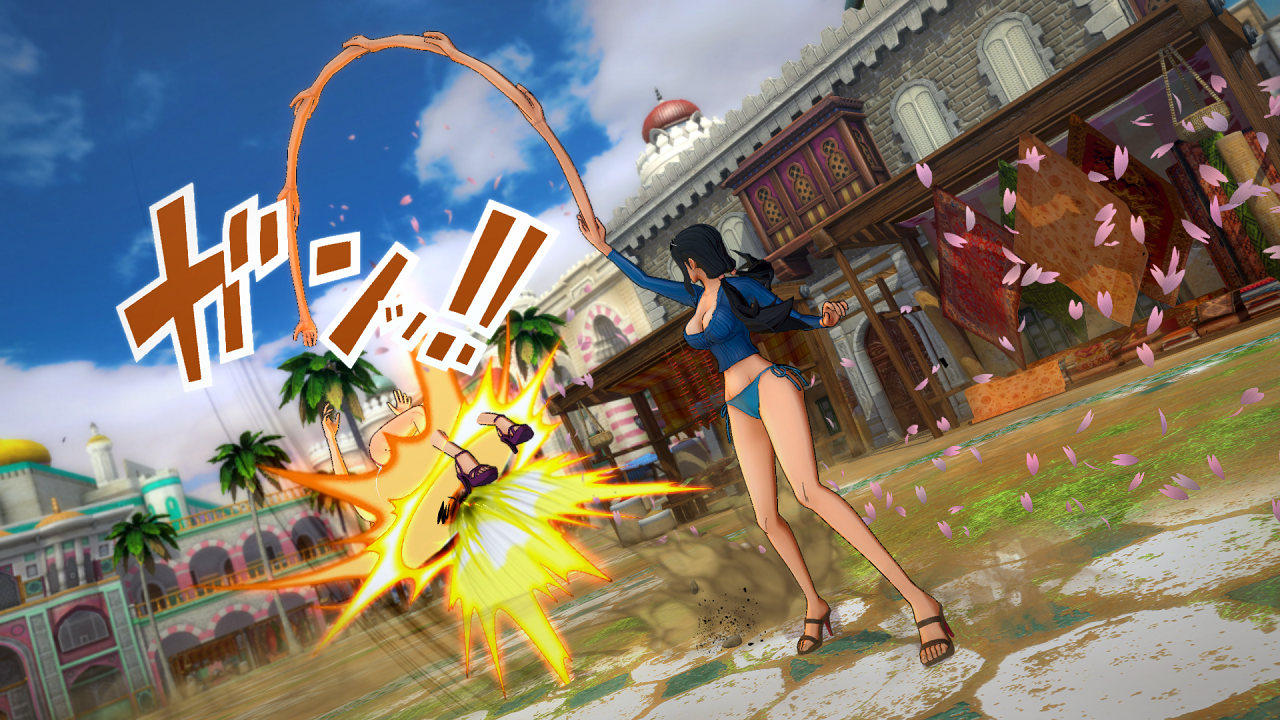 Early on, especially during the only campaign available, the story mode acts as an extended tutorial. All through Luffy’s campaign, the player is introduced to the battle systems. They aren’t exactly deep, however. One button does normal attack (square or ‘X’), another does unique (triangle or ‘Y’). Using the L1 or left bumper acts as a shift key to allow for a button press to execute a special attack. There is an “ability” gauge to modify attacks, character swapping, and support characters. There is also a range modifier and an Ultimate gauge. This might seem like a hefty list of features for a one-on-one fighter, but it feels sparse in practice. Super Smash Bros can get away with this simplicity because of the items and on screen chaos. Here, it feels empty.

This is not to argue that layering on more systems would have improved the game. Some fighters can go overboard with this, causing a whole new slew of accessibility problems. The issue is that the fundamental system, while great for fans of the show that just want a simple game to enjoy, is somewhat flawed. It’s not bad, though. It’s kind of just… there. 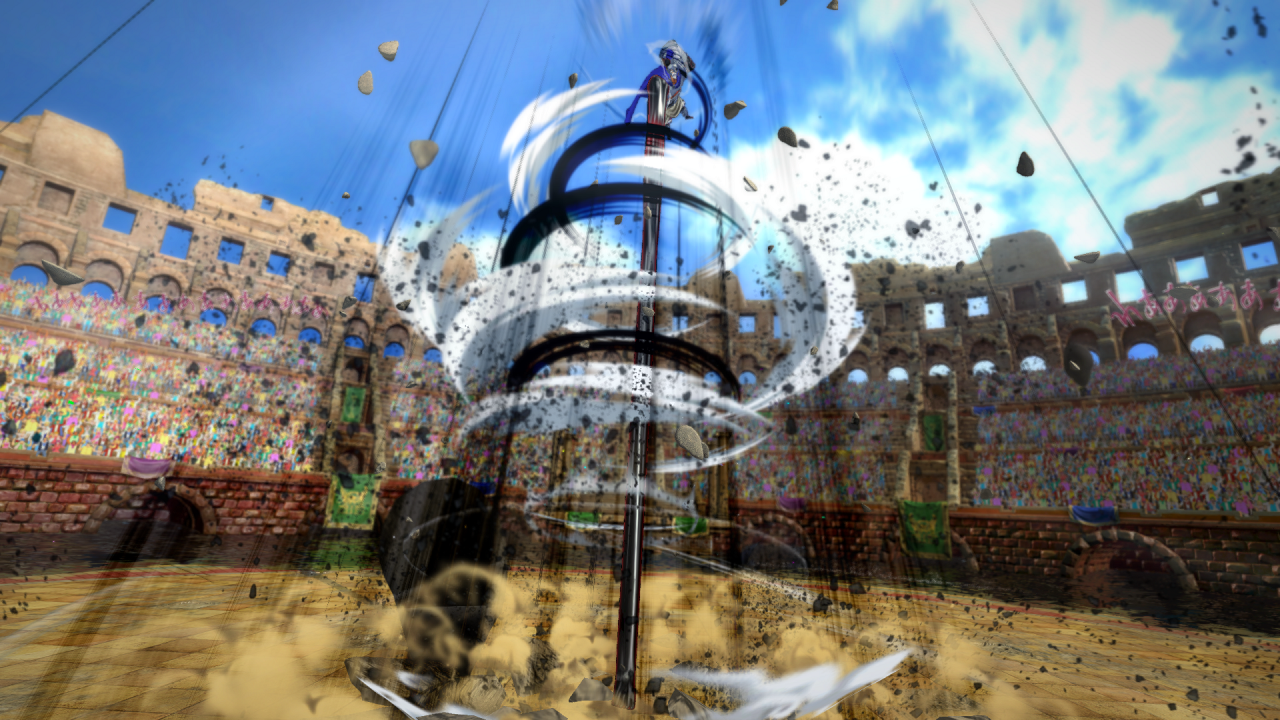 One thing that could frustrate people is the fact that pretty much all of the modes are locked at the beginning and slowly doled out. Picked this game up to play online with a friend? Too bad. Luffy’s campaign must be finished first. It’s understandable that Bandai Namco would want to gate off online to provide newcomers with basic knowledge before jumping online to get crushed, but that shouldn’t be a requirement. Gamers should be allowed to make mistakes. This might be more of an issue as it caused more work before this reviewer could test the netcode. The verdict, for the record, is that the Xbox One version was surprisingly smooth for all the issues I experience with that service, and the Vita version was a ghost town.

Once they are all unlocked, there are plenty of other things packed into Burning Blood. Solo players can challenge themselves with completing the various, decent length story campaigns for different characters, or jump into some Wanted Poster challenges. These require the player to fight preset battles for cash and prizes, with tons of trophies/achievements attached. The special ones get tough. There is also the expected Ranked and Player matches for glory and fame. The most interesting mode was Pirate Flag. Here, players choose a team, such as Straw Hats or Marines. They are then whisked away to a map to fight over various bases. Winning at the base increases the points for takeover. Most of these matches are versus AI, though it seems that player matches can occur based on the failed attempts the game made to find a player. It’s a cool little asymmetrical mode for people who want to play multiplayer but hate other humans. 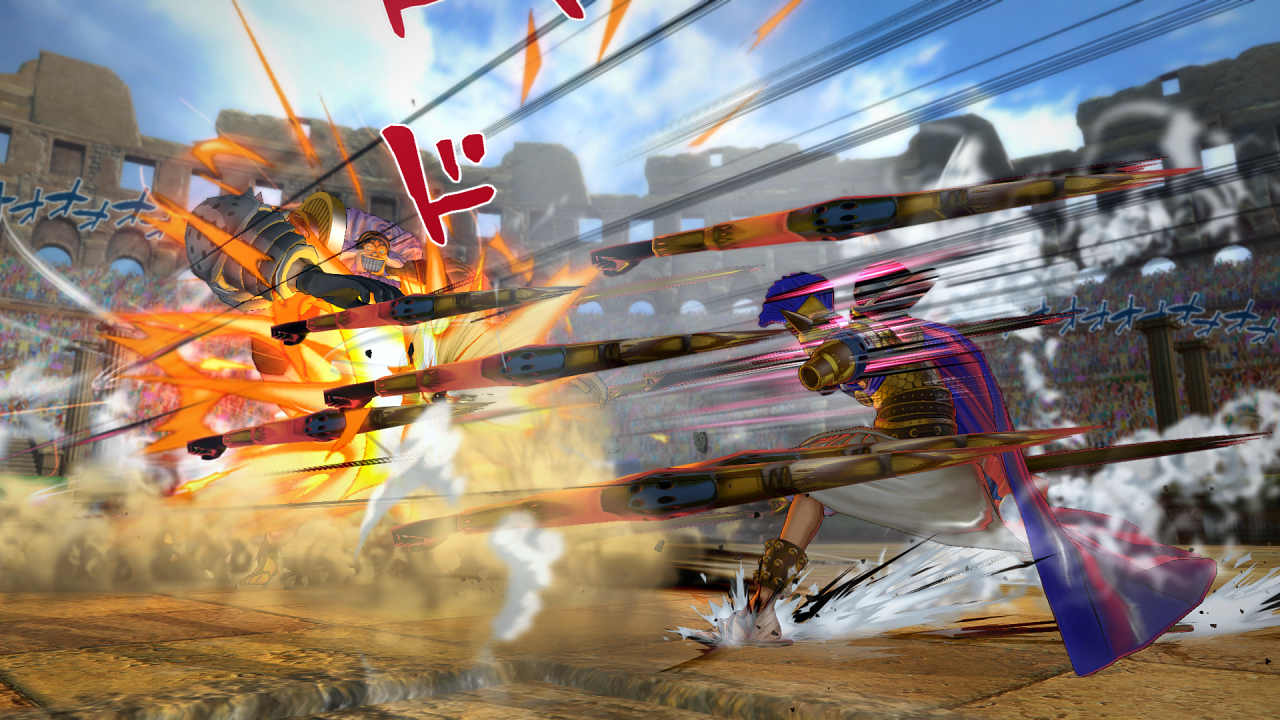 The graphical presentation is where the game holds its own. Filled with well rendered character models, it’s fun to look at. The character animations are well done, too. Luffy’s rubber arms and Mihawk’s sword swipe impress. The heavier hits are punctuation with manga styled effects, lending more punch to the…punches. Plus Whitebeard is just cool here. That one got away from me. Plus, the style of animation helped the jokes work better. One particular early one got me. Gum-Gum Human Shield!

For players trying to decide if they want to go with a home console or Vita version, this isn’t going to make things any easier: they are functionally the same. The content is identical and the graphical hit that the title experiences on the portable system is mitigated by the smaller screen. The best advice would be to decide what is more important, portability or a more populated online community. That decision will give the best answer. 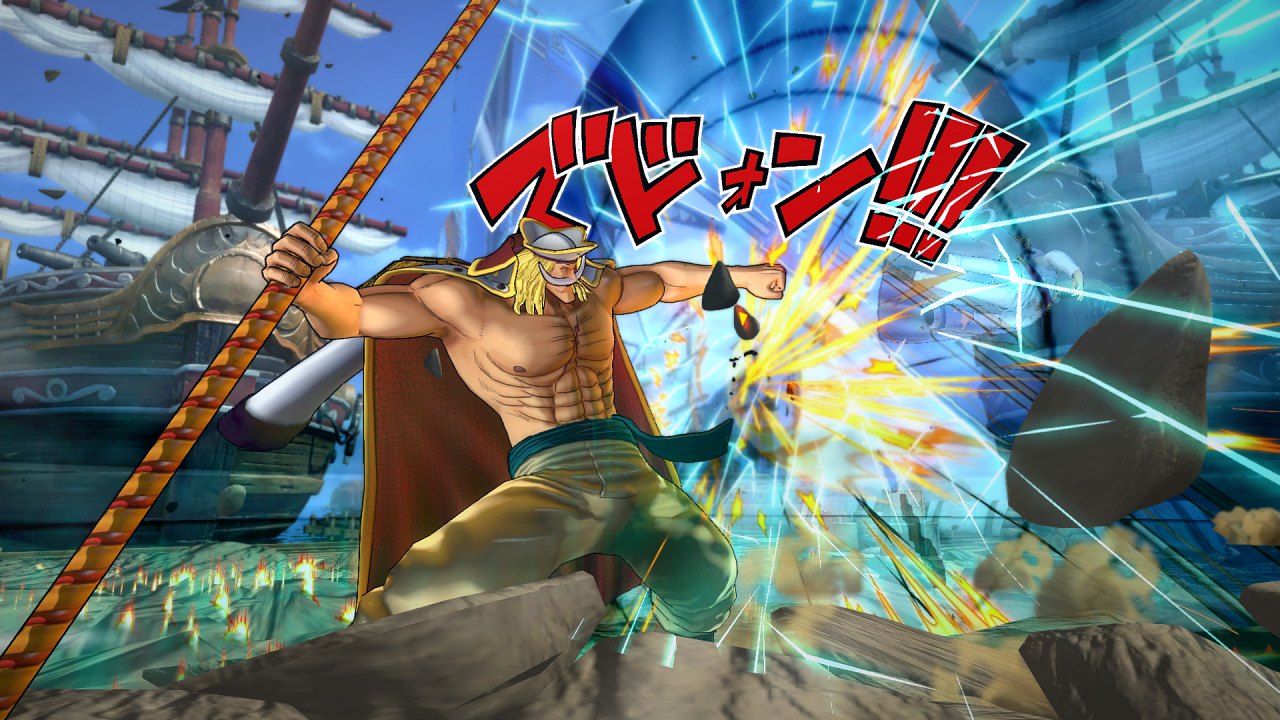 One Piece: Burning Blood is one of those middle of the road games that makes game reviewers weep. The fun of praising or decimating a title stolen away without so much as a cheeky card. The game itself does work as an introduction to the series, giving the briefest of glimpses as to why it’s so popular, and piling on the fan service with countless playable and support characters. Neither good nor bad, it exists. That will be enough for many fans.