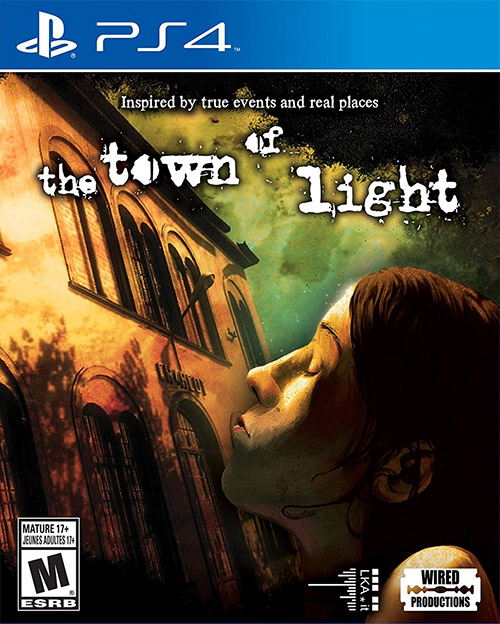 The Town of Light

Some of the more unnerving experiences in gaming do not come from jump scares or plot twists involving supernatural demonic beings, but from the simple pairing of innocent, childlike elements within a desolate and bleak world. The Town of Light has playing assuming the role of Renee. Her tale begins with her wandering around outside a facility that appears to be abandoned, which is the Volterra Psychiatric Asylum, where she spends most of her youth as a resident with most of the narrative’s focus being on when she was 16 years old in 1938. There is a playground and Renee is free to go down the slide, take a spin on the merry go round or try to enjoy the see saw, which is kind of a depressing activity when there is no one else on the playground.

When Renee finally gets to one of the buildings, her objective is clear. Charlotte, her doll, is somewhere in the ward. Charlotte is in the dark, alone and cold. Renee wanders through the abandoned hallways in the decaying building searching for her, preventing the player from traveling further until she makes sure her doll is cared for. With the urgency of a panicked mother seeking a lost child, Renee laments on Charlotte’s situation and can only focus on her well being. When she finally finds her we see the doll as a long neglected toy, the features of her face cracked and weathered much like Renee’s psyche, but seeing those lifeless eyes only motivates Renee to take care of her. The goal is now to take her to a wheelchair so that she can be comfortable, and then to the surgical ward so that Charlotte may warm herself under the surgical lights and free from the prison of darkness.

Now that the doll is no longer cold and lonely,it is time to get back to the objective at hand which is to piece together the fragments of Renee’s past by poking into every nook and cranny of the Volterra Psychiatric Asylum. The broken down asylum immediately draws comparisons to environments found in games like The Last of Us or the Fallout games released by Bethesda where just about every location shows signs of ruin, either through neglect over a period of years or through more destructive actions. This is where the similarities end since unlike those other games, Renee is the only living presence to be found in The Town of Light, local flora excluded. 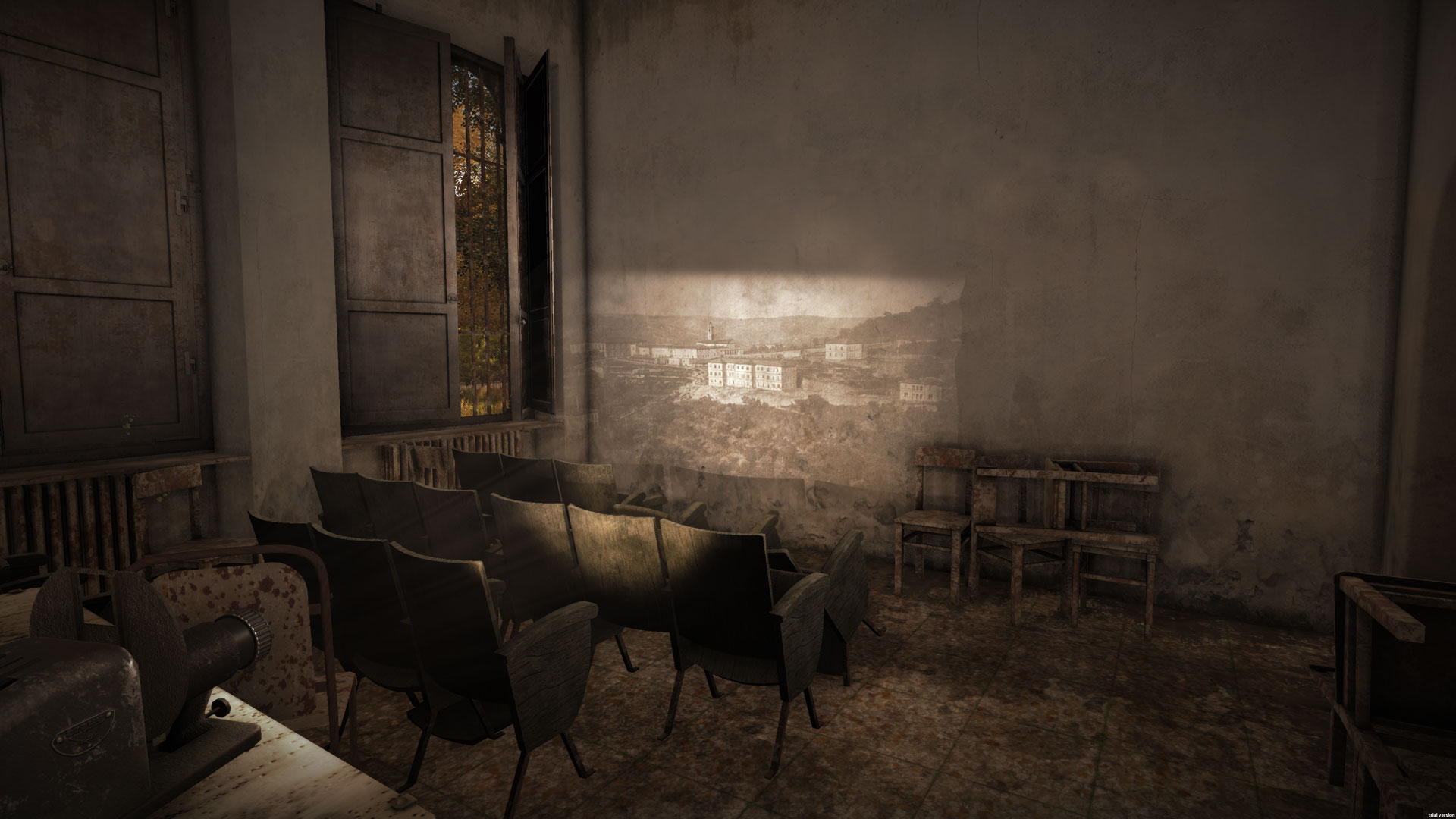 With the threat of attack absent, Renee is free to explore with the only horrors coming from within. Stepping by a familiar area may result in her commenting on something she remembered from her time there, or it may trigger a flashback in the form of a cutscene, typically something that is rather disturbing. Hidden among the debris there are old medical texts, case note, and Renee’s old diary pages that also help piece together the puzzle of what happened in her past.

The Town of Light is essentially a first person point and click experience where Renee moves about the asylum and examines points of interest. Progressing through the game happens when a certain point is reached in a chapter where Renee has a flashback or discovers something significant which causes another area to open up. The next location of the next objective is not always clear, but this lack of direction fits the context of wandering around a deserted area to piece together memories of past events. How the story progresses and what areas open up next do not always make sense. For example, a flashback in triggered when walking into a bathing area, which leads to a door in another area becoming unlocked. The similar appearance of every area does compound the sense of aimlessness in exploration, but during the review playthrough even when I wasn’t sure on where I was supposed to head next I ended up finding it rather quickly. 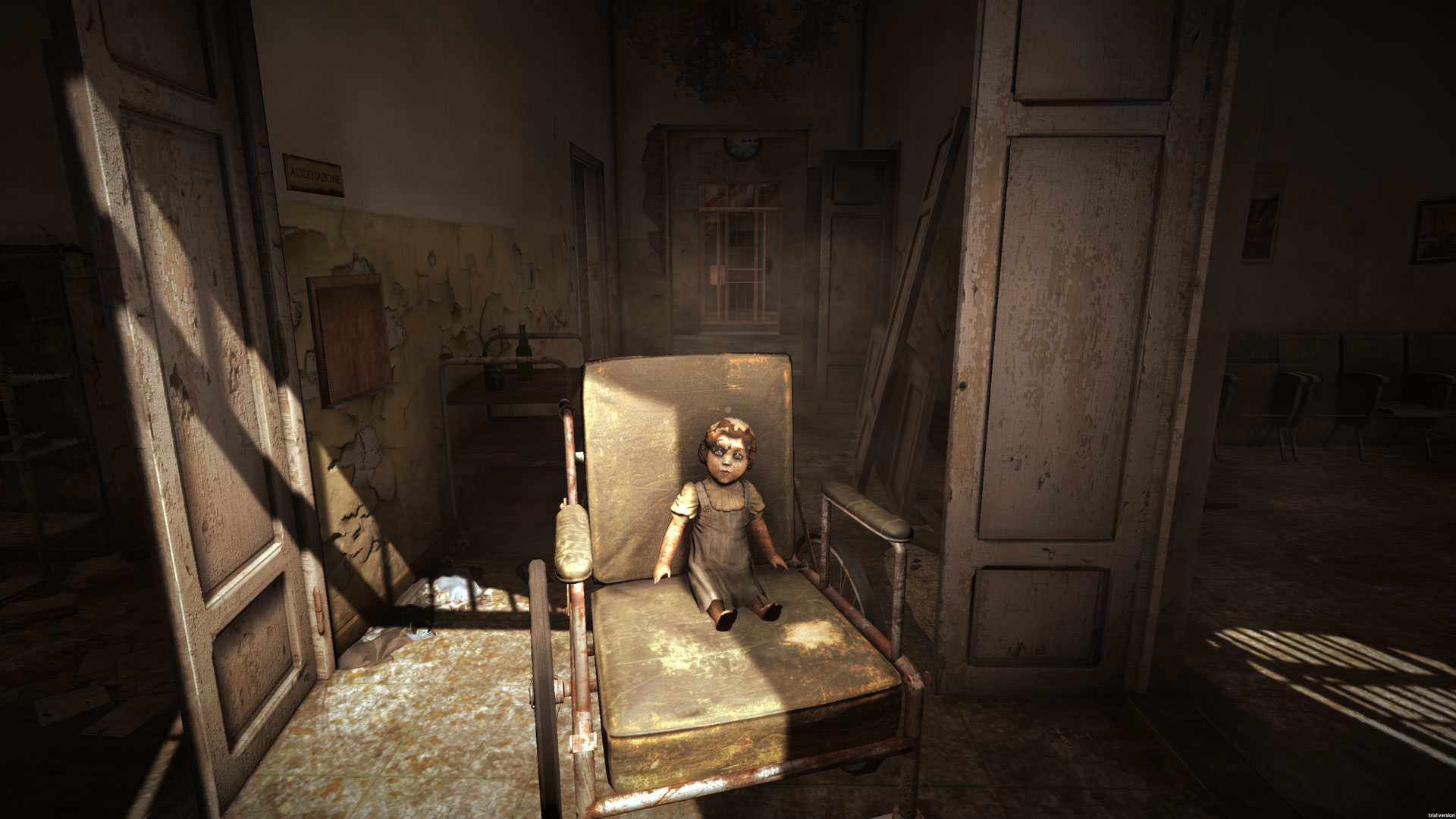 There are several different outcomes for Renee based on the choices the player makes during the game. During a point in the game Renee’s choices will determine which of two paths her story will follow, and there are four possible outcomes for each path. The path taken is based on which defense mechanism Renee uses to repress the pain of remembering, and the four possible outcomes are Rationalism, Disassociation, Depression, or Obsession. These are all based on the relationship between “me” and “the others.” The writings of Italian psychiatrist Vittorino Andreoli were the inspiration for using these four defense mechanisms.

The Town of Light does have some historical basis. The Volterra Psychiatric Asylum is a real facility in Tuscany, Italy, and the location has been meticulously created for the game. This facility still stands today, though it was shut down in the 1970’s when the Italian government closed many facilities such as this and returned human rights to their patients. While the argument can be made that we still need to make improvements on how mental illness is treated today the modern approaches are vastly more effective and humane than the conditions depicted in The Town of Light. The case study of Renee is fictitious but does draw inspiration from real patient files. 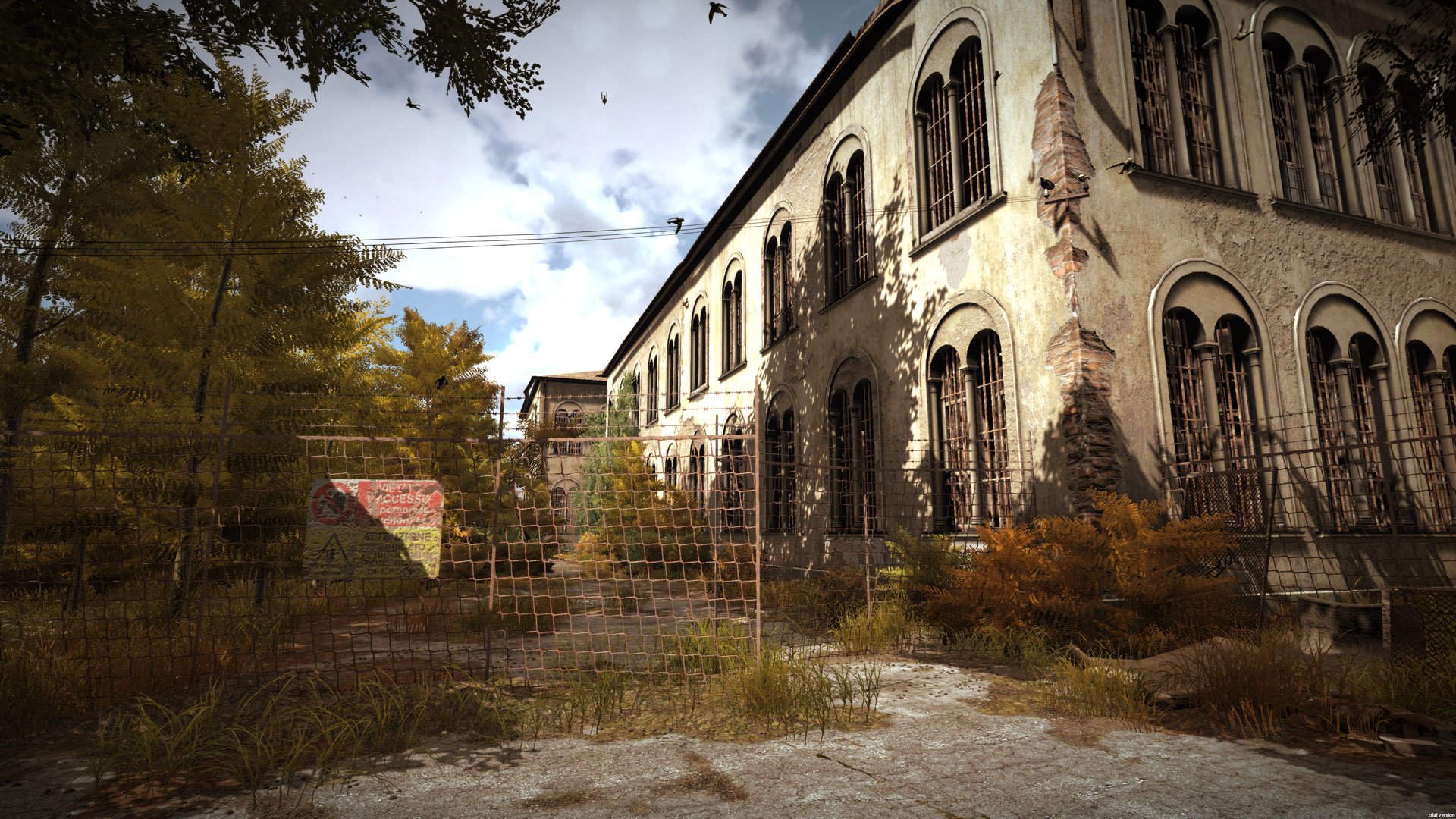 The graphics do a fantastic job of recreating the closed down asylum, and the music while not always present does set a somber tone. The shattered complexion of the wide eyed doll sitting in the wheelchair under surgical lights has a subtle creepiness to it that encapsulates the overall feel of Renee’s exploration. The art direction used in flashbacks has the style of a gritty graphic novel, and Renee’s sparse dialog can be chilling when she narrates the present from her somewhat delusional frame of reference or when she discusses the unsavory events of her past.

The Town of Light was originally released for PC in 2016. This updated version expands on the original’s narrative by adding new elements to the story such as Renee’s diary pages. New music and voice over acting was added as well alongside many graphical upgrades, such as more environmental detail, improved lighting and texture mapping. To fit the somber tone of the game, the setting has taken on a more autumnal appearance. People who already own the PC will receive these changes in a free update. 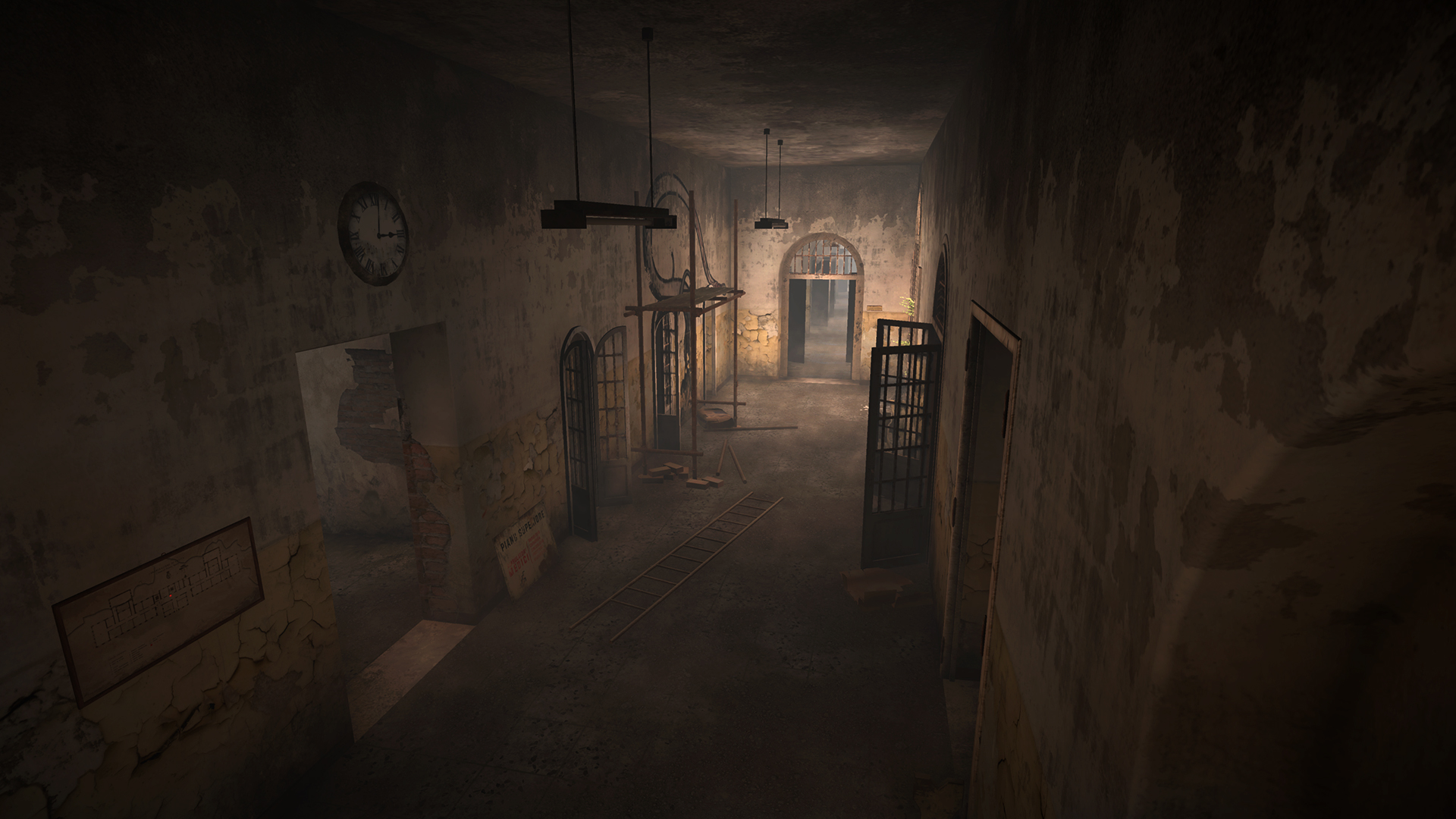 The Town of Light is an ambitious game to cover such heavy subject matter. There’s no real action to be found, just exploration and a bleak but intriguing story to be told. The game is rather short; most players can expect to complete a playthrough in under five hours, but that seems like a good length for this type of experience. The strong points include the story and the narrative style used, but wandering aimlessly looking for the next trigger to progress the story can feel tedious at times. The Town of Light is a niche game, but overall it is a good one for the target audience. I found it enjoyable, but I also have an interest in old medical and mental illness treatment practices. Someone looking for action or a Resident Evil style horror experience should skip this, but those looking for a good story in a beautifully bleak environment to explore at a leisurely pace would likely find some enjoyment in The Town of Light.