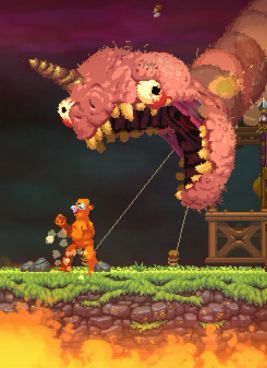 Every once in a while there’s a title that comes along which becomes ingrained in your gaming life. For many, their go-to multiplayer experience became Nidhogg right when it launched in 2014. It was a 2D fencing game with incredibly simplistic artwork and easy to pick up gameplay. However, there was a great deal of strategy to controlling the characters (as well as faking out opponents) which made each and every match different. When Nidhogg 2 was first announced, many fans balked at the reveal. How could anyone possibly improve on such a great title? Also, how dare the aesthetic be modified from its simple allure to some totally gaudy, over the top pixel art? Fortunately, Nidhogg 2 is a game worthy of its predecessor’s name.

Instead of playing things safe this sequel attempts to improve upon the core battle mechanics in multiple ways. The first and most obvious change is that there are now multiple types of weapons in the player’s arsenal. Yes, the fencer’s foil is still included. You’ve now also got access to a bow and arrow, dagger and broadsword. These vastly different weapons were selected for a reason – they result in players coming up with distinct strategies to best use each. Now spacing is much more important. For example, if one player holds a dagger and the other is armed with a bow and arrow, both need to determine their best strategy for this scenario on the fly. Initially, it might seem that weapons such as the tiny dagger in particular are unfairly weak. That’s not the case. After digging in with gameplay it becomes obvious that each weapon received a fair bit of balancing work.

The hardest part for both newcomers and fans will be mastering each weapon. Gaining skill with each type is important because players don’t actually select what they’re taking into battle (unless a local multiplayer match is specifically set up to only include specific weapons). Every time players spawn they’re randomly given one of the weapons to fight with. It’s not hard to find a favorite weapon among the batch, but it can prove much tougher to learn to love other weapons. The bow and arrow might just be the most challenging from the get go. Not only is it vastly different from the other weapon types, but it also requires time to pull and release an arrow. However, skilled bow players gain a quick edge before others learn how to combat it at great distances. As with Nidhogg, weapons can be knocked away leaving combatants to fight with their bare hands. Any weapons left on the ground are also fair game to steal. 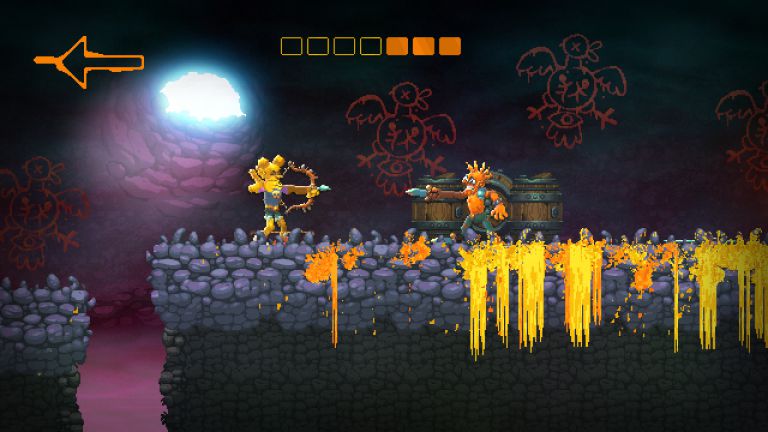 The core goal in Nidhogg 2 remains the same as the original. You’re still looking to run all the way to the last screen and sacrifice yourself to Nidhogg. There are ten new stages to do this on. Each stage features highly detailed, distinct artwork. Unlike the character designs, which are really hit and miss with people, the backdrops don’t tend to draw much ire. There are still grotesque aspects, of course, such as seeing what appears to be a well-rendered snake anus that players pop out of on one stage. Some stages change up the formula by offering obstacles. The most common obstacle is a conveyor belt. Sometimes there is an actual conveyor belt, and on other stages it is simply that the ground is flowing in one direction. Players running in the same direction get a huge speed boost. Players fighting against the current are in for a tougher screen to complete. Both the left and right screens offer the same obstacles, so it’s not unfair.

Speaking of the artwork, you might be surprised how little time it takes to get used to. Sure, at first it is off putting (primarily in comparison to the original). But once you start decking out a character in goofy clothes and hair it doesn’t prove as bothersome. The animation is great and flows well whether you’re running and jumping or slicing into an opponent. Deaths are quite gory and sometimes surprisingly long. One bare-handed death results in stomping on a downed player multiple times to reduce their head to putty, for example. Slashing into someone almost often yields a spray of colorful blood before they burst into a pile of bones. Fortunately, the art style ensures that these death scenes come across as ridiculous more than grisly. 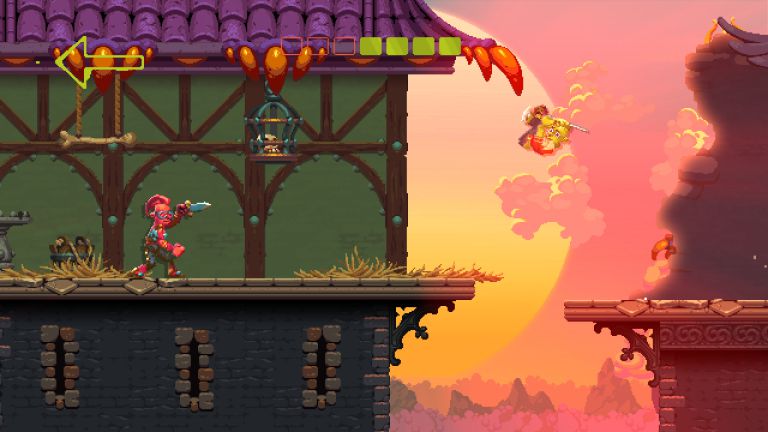 Nidhogg was a game best played locally with friends. Although it offered an online option, it left much to be desired. Nidhogg 2 follows in these footsteps. Local multiplayer offers a quick match function for two players alongside a tournament mode if you’ve got three to eight players who want in on matches. Local mode in general offers players the opportunity to specify weapons that will spawn (or even opt for a no-weapon mode). They also set the time limit and any cheats they might like to spice things up. Cheats include fan-favorite spine swords, low gravity and a handful of other tweaks. The online multiplayer mode offers a ranked option but not even unranked has these additional features like local mode does. During an online session, there were a few times that things became laggy, but otherwise it actually wasn’t perceptibly different from a local match.

An arcade mode is included, but of course the true joy of Nidhogg 2 is playing against other people. Arcade mode whisks you off to each of the ten stages. Enemies start off as incredibly awful and eventually gain better AI. There’s not much reason to play this whole mode through unless you’re looking to get a bit better at the controls when not playing with friends. That, or, you’d like to “speedrun” the game. At the end there is an online leaderboard which tracks the fastest completion times of arcade mode. Other than that, most will find their time spent primarily in local or online matches just as was the case with the first game. 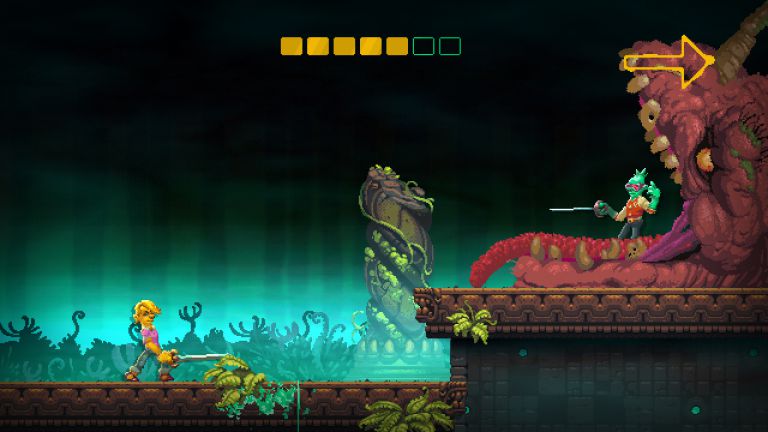 Outrageous artwork aside, Nidhogg 2 is cut from the same cloth as Nidhogg. It attempts to enhance gameplay by offering more weapons and this was a successful move. Existing fans will now find new strategies as they learn each weapon. This does reduce the pick up and play nature of the game, but only slightly. When it comes right down to it, this seems like the only way Messhof could have made a sequel to such a great game. Matches prove just as tense/hilarious as ever before. The tug of war between players was the one aspect that a sequel simply had to get right. Despite the obvious changes, Nidhogg 2 absolutely succeeds at keeping the game’s spirit alive and just as enjoyable.